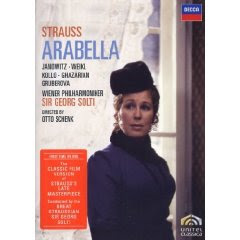 Arabella, first performed in Dresden 1933 is one of the string of lyrical operas of Richard Strauss after he so to speak bailed out of modern music drama after Elektra. A three-hour symphonic poem of Arabella, an ideal woman.

At this point perhaps I should opt for honesty: I only care for three of Richard Strauss´ operas: Salome, Elektra and Die Frau Ohne Schatten. And to cut short an otherwise long explanation regarding his lyrical operas: I find Richard Strauss´ tonal language superficial, empty and sentimental. However, I realize my opinion on these matters is completely uninteresting to anyone but myself, as they have all passed the test of time. Or at least, works as Rosenkavalier and Arabella have.

Otto Schenk has directed a traditional Arabella film, as expected. Obviously, it is a product of it´s time, being made in 1977, and a certain amount of dust is inevitable, but overall it looks rather fine as Schenk realistically depicts the slightly decadent Vienna of the 1860s. For any newcomer to this work, this film is a good place to start.

The overwhelmingly creamy golden beauty of Gundula Janowitz voice is unmatched by any other lyrical soprano and as such she is vocally ideal for this repertoire. However, she lacks the characterization to be an ideal interpreter. The golden voice is there, the character beneath the lush sound is not. Furthermore she is not a very good actress. Ultimately, I´d prefer a less "perfect" sound, but with more character. For those with different priorities, she may well be simply perfect. She is well-matched by Sonia Ghazarian´s Zdenka.

Georg Solti, on the other hand, has character in spades. And he is simply perfect in Richard Strauss, most of all because he is completely unsentimental. The straight, lush playing of the Vienna Philharmonics may not be bettered. Also a very strong and characterful performance from Bernd Weikl as Mandryka.

Janowitz failings as an actress are particularly frustrating in light of her vocal talent. This is apparent on CD but particularly on video. She completely sucks the life out of the Countess's areas in the YouTube clips of the Paris Figaro.

Actually I think it is almost worse on CD - to listen to that beautiful voice in VLL and Capriccio with zero interpretation is almost painful.

When you listen to Janowitz, you don't look for interpretation. You bath your ears in a pure voice, in pure music. May be it contradicts your conception of opera but it is a pleasure in its own right. And it is a pleasure you can even obtain in opera. She is not Sieglinde, she is not Maria Boccanegra, she is not Countess Madeleine, but I feel an immense pleasure listening at her voice singing the notes of these roles. And I would leave for the desert island with the jewel of her voice, in the shrine HvK offered her in VLL.

That said I won't support this DVD. The production is old fashioned. She looks at everyone with bland eyes and and a stupid smile. And I really don't understand the 5 you gave to Weikl. But may be my disappointment with gundula put me in a bad mood.

Well I suppose I won´t be having your support in the assessment of Janowitz´ VLL that I am just writing about in the context of the new Renée Fleming/Christian Thielemann VLL CD.
I suspect we WILL agree about Renée Fleming´s VLL, though...

On second thought Bernd Weikl probably doesn´t deserve that 5, he is not good-looking enough...

Of course I don't contest your right to find Janowitz's singing painful in VLL ! The problem is that we are in a public place and I would be sorry if somebody, just passing by, missed an extraordinary opportunity of esthetic bliss, because of your post...

Actually I think I´m very fair towards ms. Janowitz, acknowledging the extraordinary beuaty of her voice, but pointing out that she is not a very good actress or a very expressive singer. I would say that´s a balanced assessment. Now, what emphasis to place on these elements, obviously is individual.

Regarding the VLL maybe I wasn´t specific: I don´t find her painful to listen to at all, but I just find it so incredibly disappointing that a singer with her vocal ressources is not more expressive.

It isn´t so many years ago I first heard Gundula Janowitz on CD and I immediately thought that this was the most beautiful thing I´ve ever heard and I listened to her again and again for a week. But then, after a while, the lack of drama started to bother me and still does..

But I completely agree with the general topic of your post: I have gotten numerous e-mails from people telling me they have bought or not bought this or that recording based on what I write here.
I am aware of that and of the vastly increasing number of hits on this site and try to be fair, while still expressing my opinion.

Especially regarding younger performers, who appear only in few posts on the internet I am very careful not to be unfair, especially if I´ve only heard them once or twice.

In brief: Anyone is more than welcome to disagree with me and post it here. I am not easily offended :)

Well, since Lucia Popp´s recording with Tennstedt, imo, is the best interpretation on the market, I am not likely to forget it..

To put fuel on the fire of controversy!

I have in my drafts a post on the Ariadne film , a good opportunity to continue the discussion..