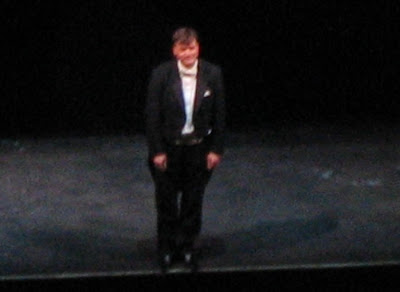 Standing ovations for Christian Thielemann at the Vienna Parsifal curtain calls.
Parsifal, Vienna State Opera, March 20th 2008. Mielitz (d), Christian Thielemann (c).
Cast: Stephen Milling (Gurnemanz), Thomas Moser (Parsifal), Mihoko Fujimura (Kundry), Falk Struckmann (Amfortas). Information here
How do you describe a truly sublime orchestral performance? I am not religious, so religious metaphors will not do. Even so, I had a strange feeling during this Parsifal, that this is the musical equivalent of being in heaven and seeing all the stars spread out underneath you. At other points I had distinct reminisces of long gone relatives or of travelling into a star-covered eternity.

The ethereal beauty of Christian Thielemann´s Parsifal is indescribable. We made the trip to Vienna on the strength of him conducting, and our expectations were ridiculously high. But they were indeed surpassed. There is no doubt that Thielemann gives everything he has to this music: He is not afraid of pathos or grandness and masterly uses the entire range of orchestra volume from long passages of the tiniest pianissimo to the earth-shattering fortes particularly poignant at Titurel´s funeral. The details of the score are laid completely open, the strings shimmer as flickering stars while the slow rumble of the basses arise from underneath. Has there ever been a more masterful interpreter of this score? I seriously doubt it.

I saw this production last year, and commented thoroughly on the Christine Mielitz´production at that point (read it here), so I´ll limit myself to saying: I still don´t understand it. It was probably not helped by the fact that I had my eyes closed for the majority of the performance, but I did open them with regular intervals, to check if anything new was happening (mostly there wasn´t).

For once, the balcony standing room was as popular as the floor standing room spaces, and the reason quickly became clear to me: You cannot really see Christian Thielemann from the floor spaces, and this was indeed the reason most people came this afternoon. The massive applause greeting him even before the performance at least equalled the reception James Levine gets at the Metropolitan. I had opted for a cheap balcony seat, with a good view of the stage (which I hadn´t expected), but damn....I could not see Christian Thielemann properly (which I had expected to be able to) - only when he stood up could I see the tip of the stick. But the acoustics at these spaces are great - almost to great, in that you can hear every ruffle of paper even from the opposite side of the auditorium.

Stephen Milling is a superb Gurnemanz. He as the exact physical authority on stage to make Gurnemanz an interesting character as opposed to the old, lifeless man so often seen. He was a bit pressured at the top, but nothing that seriously impacted on his excellent performance. He received the most applause of the soloists together with Mihoko Fujimura´s Kundry. I had expected Thielemann to drown Fujimura, who has a rather small, but very beautiful voice, but surprisingly he didn´t. Though very beautifully sung, I don´t think that Kundry suits Fujimura well: While singing precisely and with impeccable intonation, she almost completely lacked the drama associated with Kundry. It was just too nice. I´ve previously had the same problems with her Brangäne and Waltraute, and honestly think she may be dramatically better suited in some of the lighter repertoire. Thomas Moser did not make any particular impression with his Parsifal, and indeed were booed by some. Whenever I see Falk Struckman on stage, he always seems to play himself - which luckily works quite well for characters as diverse as the Dutchman, Amfortas, Rangoni and Iago. Struckmann definitely is at his best in the theater. While his recorded voice often sounds dry and wobbly, he sounds much fresher in live performances.

But, no doubt, this evening belonged to Christian Thielemann.

For those not able to go to Vienna, Christian Thielemann´s magnificent live recording of this production from 2005 is available on DG with Plácido Domingo and Waltraud Meier. 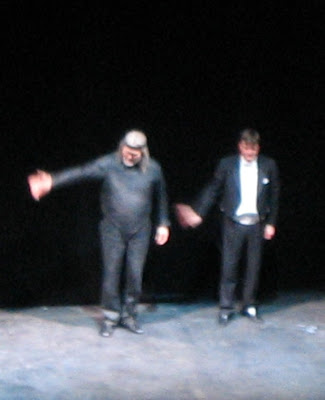 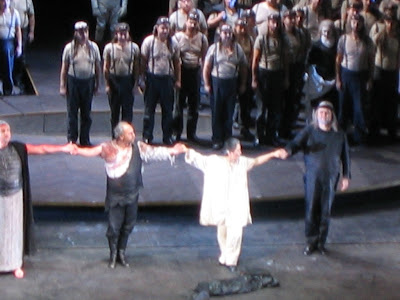 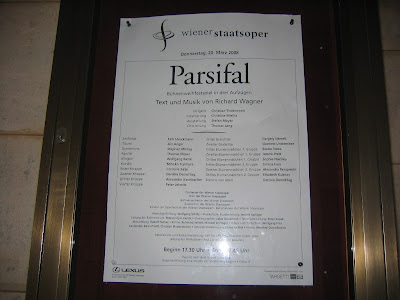 I was at that performance. The only thing I thought while listening all rapt was: How easy it is to detect that a performance (the conducting) is so superior to others, and how difficult it is to put into words exactly WHY. The orchestra wasn't even that great... but afterwards I felt like I could listen to one more Parsifal. Stunning. Too bad the directors ran out of ideas for the third movement.