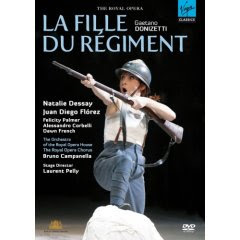 This is a DVD of the same La fille du regiment production shown earlier this year on the HD telecast from the Metropolitan Opera. I´ve written in details on the HD transmitted performance here, all of which (with a few exceptions) also applies to the DVD, and need no repetition.
The most notable exceptions: As the Duchess of Krakenthorp the vastly irritating Marian Seldes of the MET was replaced (or rather it was the other way around) by the much superior Dawn French. But most importantly Bruno Campanella brought much more life to the score than Armiliato did at the MET.
Furthermore, Natalie Dessay seemed in better voice, though I still have the impression she is tearing rather heavily on on her vocal reserves. Juan Diego Florez was the same. At least to a non-Florez, non-belcanto afficionado as myself..

In brief, I found this production both funny and inventive. Most, if not all of this DVD may be seen for free on YouTube.

I mean, in the face of history, the so-called legendary 1972 NY performances with Pavarotti pale in comparison with both JDF's performances of La Fille in London, Vienna and NY.

OK, I almost do not dare write this, but the reason for the 4-5 is that I think JDF is rather boring on stage: He looks like a well-behaved school-boy and I don´t find him very interesting at all.

However, he should of course be judged within his own repertoire and voice type (and not compared to vastly superior Wagnerian bass-barytones...) and in that regard I´ll probably have to agree with you that he deserves the 5. I´ll change it.

But then I´ll also change Natalie Dessay to a 5, as I don´t think it fair to rate him higher than her, though she vocally was rather stretched out. But I like her.

"and not compared to vastly superior Wagnerian bass-barytones..."