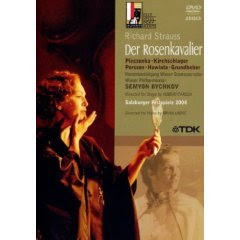 Given the choice between nostalgia or decadence, the traditional Rosenkavalier productions on DVD (see below) chose nostalgia. Robert Carsen chose to depict a decadent society in decay in his 2004 Salzburg Festival production.

First act takes place in the decadently luxurious chamber of the Marschallin and the enourmous stage of the Grosses Festpielhaus is utilized to the maximum as several things take place simultaneously in parallel chambers.

We are in Vienna immediately preceding the outbreak of World War One. Octavian seems only one in a (long) string of lovers of the Marschallin. Ochs is a military man arriving with his regiment of soldiers.
Act two takes place in a large dining room with a dinner table almost spanning the 100 meter width of the stage complete with war paintings on the back wall. Sophie is wiser, not quite the naïve innocent girl reciving Octavian, when he arrives on a live horse to present the silver rose. Ultimately Ochs walks almost straight into Octavian´s sword while his regiment of soldiers harass the household of Sophie´s father in a very entertaining scene.

The third act takes place in a brothel covered in red lights, complete with full frontal nudity and transvestites, definitely more funny than sexy. Octavian is clearly enjoying himself with the girls and make out with Sophie on the bed with the Marschallin walking by. This relationship won´t last. And in the end, we just see the assassination of Archduke Ferdinand setting into motion the chain of events leading to the First World War.

The production was equally loved and hated by audiences in 2004. Clearly my favorite Rosenkavalier production on DVD, not the least due to the simply outstanding cast.

Adrianne Pieczonka´s noble Marschallin shows why Strauss is her true fach and in my opnion she is the best Marschallin on DVD (as well as the best alive) - the nostalgia, the resignation - she seems to capture every facet of this part with her varied acting combined with her superb Straussian voice.
I have simply not heard a finer Octavian since Christa Ludwig than Angelika Kirchschlager - her even, rounded and simply beautiful voice combined with a rather masculine edge to her acting makes her unsurpassed as Octavian.
And Miah Persson´s beautiful Sophie completes this first-rate trio with her clear soprano and entirely convincing acting. Franz Hawlata is more noble than the traditionally ridiculous Ochs, and while he may not excel with his low notes, he more than fulfills Robert Carsen´s demands.

Do the Vienna Philharmonics really need a conductor to play this score, which they´ve probably played more than any other orchestra? Needless to say they played sumptuously capturing the exact right rhythms in the walzes for Semyon Bychkov.

Strongly recommended. However, those preferring a traditional Rosenkavalier may want to look at one of the two Carlos Kleiber-conducted Otto Schenk productions (I´d personally prefer the one from the Vienna State Opera) or the Georg Solti-conducted production from Covent Garden.

I am globally OK with your review. It is one of the best Rosenkavalier DVD on the market. But I don't agree with you point of view about Kirschlager. Her voice has been decaying steadily those last years-Her Paris Ariodante was disappointing, and even her Sesto in the Glyndebourne production of Giulio Cesare lacked vocal line and was frequently out of tune - and in 2004 you can alas feel it already. She is really convincing physically, but there is a lot af acidity in her voice. It is curious how opinions can differ but I heard nothing such as an even and rounded voice. And I have heard a finer Octavian since Christa Ludwig. Elina Garanca.

I too, "globally" agree with your review. That is not to say that I actually disagree with anything you say I simply like Pieczonka and Persson (although I've never heard her live) less than you seem too but this is the sort of specific afinity not really susceptible to reconciliation.

I must, however, dissent quite vigarously from NVs opinion vis-a-vis Kirchschlager. Having heard her 4 times in the last 10 months, including once as Octavian, I have to say that your description of her voice and portrayal are Most accurate. It would appear that this is a somewhat more objective matter, in that one may or may not like a voice but people could at least bee able to agree on its basic quality. Having said that I've had enough disagreements on these matters with people sitting next to me in the theatr to know that this is often not the case. (Do concur in respect of Garanca's excellence as Octavian.).

Oh,and Mostly, nice job redecorating. The place was pretty snazzy before but you've really outdone yourself.

I may have a problem with Kirschlager. I have forgotten a very dull(vocally) Idamante two years ago in Vienna. But the production was no more than a complete disaster (Only Kuhmeier's Ilia emerged from the wreckage).

It would probably wise to forget about objectivity. Even concerning basic qualities. In fact I rather like Kirschlager's timbre. But listening to hear I feel unsteadiness and insecurity. And for me this Rosenkavalier is no exception to the rule.

You enabled comment moderation, mostly opera. I do not dispute your right to do so. But is it possible to know why? I think you are conscious of the fact that people won't write the same things if they know they are moderated. Maybe that's precisely what you are looking for!

NV - I´ve had to enable comment moderation for comments on posts which are more than 30 days old. Occasionally I have done this in the past as welland then switched it off again. The reason is that I just received several spam comments on the old posts, which Í have then had to remove manually - last time it was some anti-semitic comments on the Wagner posts. To avoid having these things hang "on air" I switch on moderation when I am away for a couple of days. Earlier nobody commented on the old posts, and thus nobody noticed - now they do, that´s the difference.
I´ll try and turn it off again a and see how it goes...

I recently came across your blog and have been reading along. I thought I would leave my first comment. I don't know what to say except that I have enjoyed reading. Nice blog. I will keep visiting this blog very often.