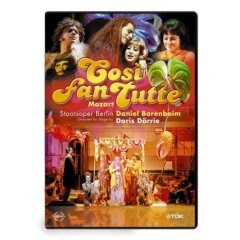 In summary: This production is absolutely hilarious and one of the most entertaining operas I´ve seen on DVD. Action-packed and colourful as well as musically superb.

German film director Doris Dörrie transports the action to the 1960´s apparently viewing the faithlessness of Dorabella and Fiordiligi as the sexual liberation of the 60´s.
In the beginning, we see the two neat and uptight couples in suits and two-piece dresses in a conventional environment. When the two men come back they are disguised as hippies and the women become flower children, climbing effortless in and out of the orchestra pit like a swimming-pool.

Several of the ensembles are just hilarious, the video clip below of Guglielmo and Ferrando drinking poison is a typical example of the happenings, which continue throughout the opera. Finally, Doris Dörrie rightly opts for an ambiguous ending.

One of the reasons this concept works remarkably well is that the vocal and orchestral performances are superb.

I doubt, Dorothea Röschmann´s Fiordiligi is to be matched today (if so, I´d like to know by whom)- a splendid comic actress, but her Fiordiligi is never silly. Furthermore she is a superbly stylish singer with a "Come scoglio" I´ve never heard better.
Katharina Kammerloher is absolutely wonderful in a delightfully underplayed characterization of the funnier Dorabella. She is perfectly matched with Hanno-Müller Brachmann´s hilarious Guglielmo, while Werner Güra was more anonymous (aren´t the tenors always? ...) as Ferrando. Daniela Bruera was great as the malicious Despina. Roman Trekel was strangely stiff (he always is), but superbly scheming and cynical as Don Alfonso.

Those familiar with Daniel Barenboim´s Mozart will know what to expect: Slow, poignant and structured - in short: Superb.

The entire DVD seems to have been uploaded on YouTube.

Just saw this and it is really quite excellent. The concept works very well and is easily my favorite non-traditional Cosi (it is preferable to most traditional Cosis I've seen as well). I really wasn't familiar with any of the singers with the exception of Roschmann (I had heard Muller-Brachmann and Kammerloher a couple of times in concert but really formed no clear opinion of them).

Roschmann is indeed terrific but I would place Fleming (who sang the role all too infrequently and dropped it far too early) and possibly (probably?) Roschmann's contemporary, Frittoli, ahead of her as well. It is yet another contemporary of theirs who is, however, easily the best Fiordiligi in my experience.