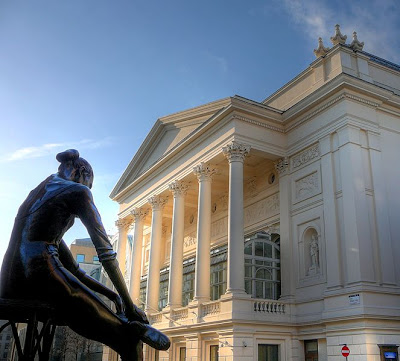 The current building is the third on the site and dates from 1858, but was extensively renovated in the 1990s. The Royal Opera House (Covent Garden, London) seats 2268 people. More information on the history of the house here.

Kasper Holten is intendant of the Royal Opera from 2011. Antonio Pappano is musical director.

New productions are generally modern, though only moderately inventive (generally speaking) and quite a few dusty traditional productions are still around (e.g Lohengrin, Fanciulla del West).

Ticket prices and overview of the auditorium may be accessed here.

Tickets are incredibly expensive, and though the Royal Opera claim ticket prizes to be lowered this season, the calculations behind that argument must require fairly advanced mathemathical skills, as the price of identical seats have increased this year compared to last year.

The organization of the Royal Opera website leaves much to be desired, such as the presentation of a complete season overview, which may only be displayed to those with well-developed internet detetctive skills. Ticket bookings come in "seasons" - e.t. autumn, winter, spring, summer. Standing room spaces are sold in advance like all other tickets. A limited number of seats are reserved for sale on the day of the performance. The cheap tickets are located in the upper ranges of the theatre, some of them requiring rather strong binoculars to get a glimpse of the stage.

The Royal Opera is located in the middle of London, next to the Covent Garden market.
Posted by mostly opera... at 22:50

Top price tickets are expensive and always have been - looking through a 1993 brochure I see a ticket in the stalls was £102 ! However standing is cheaper - I paid a £1 less to stand this year than I paid in 1993.

There are are now many more seating bands. So the top price really only relates to the best seats - and quite a few good seats which have a slight restriction (eg handrail) which are sold far cheaper (less 50% for the next seat). It is also important to remember that the House is not really that big - the capacity of 2300 makes it look bigger. it is basically a 1900 seater house to which another 400 people have been squeezed in by removing boxes, extending into roof spaces and putting 3rd and 4th rows of seats where only 2 rows once were. If you are sitting in the back of the upper tier (amphitheatre) you will be actually in the triangular pediment over the portico

A lot more varied tickets are sold on the day now including standing; although still at 10am which which is a bit of problem if you are not in London during the day.

On the upside because they sell tickets so far in advance (up to 6 months) there is usually a good chance of returns that come up on the internet site - worth checking in the few days running up to the performance.

Productions are in invariably co-productions with one or two other (mostly European) houses - so it seems only fair to share the blame around a bit!! And to be honest there have been too many notable duds - Aida from Brussels (Olga Borodina had the good sense to walk out on the second day of rehearsal). Peter Grimes (another dud from Brussels) and a Parsifal from Madrid( I think) being the worse offenders.

In the last 5 years there also seems to be an increase in cases of "rented" productions brought in from other houses. Not always very successful eg La Forza from La Scala which Muti walked out of. (I can't say I would blame him either). The Fidelio from the Met was little better; although I think we have got our own back with a new Don Carlos which should be opening there later this year !

The only true home grown productions seem to be the standard houses fillers - Traviata (which I like a lot) - Figaro (which is very fine indeed) and Tosca which is ok - but looks as if they ran out of money at the end of Act II.

Again there are some odd decisions eg Carmen - which anyone would think could be paid for by flogging it to death for the next 10 years - ended up as a co production with 2 other Scandinavian houses. In its self no bad thing - but we ended up with a something which looks a 2nd rate production of 3rd rate touring opera company (apologies to touring opera companies). Fine for touring around provincial cities but doesn't really cut it in a top priced international house.