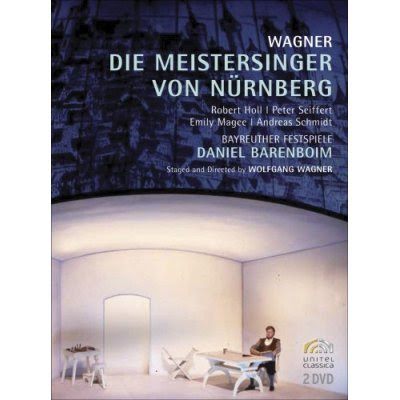 This 1999-filmed Meistersinger was Wolfgang Wagner´s last production at the Bayreuth Festival as well as the last production Daniel Barenboim conducted here. A statement I hope to be able to revise, at least regarding Barenboim.

This is in fact fact one of Wolfgang Wagner´s better productions, though not exactly placing him among the great Wagnerian directors of history. The main problem is that Wolfgang Wagner is a very static director. Índividual direction of the singers and exploring the personal relations of the characters does not seem to interest him, and they all seem left to their own devices. That approach rarely makes for enticing theater. What makes this production vastly better than his preceeding Meistersinger production is the sets: Conservative, but aesthetic and very elegant, stripped of all superfluities. Almost exclusively white. Being modern, according to Wolfgang Wagner, means dressing Peter Seiffert in a combination of pink and red..No doubt that Wolfgang Wagner´s knowledge of his grandfather´s works is immense and vastly exceeds that of virtually any other living director. However, transmitting this knowledge to the audience as engaging theater he unfortunately has never been able to do.

Robert Holl´s Hans Sachs I genuinely do not care for: He is traditional, elderly, uninspired and unenergetic. Vocally, his voice is definitely not unpleasant and he is up to it, without aspiring to greatness though. Dramatically, less so. And the complete lack of chemistry with Emily Magee´s Eva is appalling. Her Eva, for once, is straight and unsentimental, rather a grown-up woman than an adolescent girl. While Peter Seiffert has a great voice and is without doubt among the very few top Wagnerian tenors of today, his stand-and-deliver acting and general appearance, as always, leaves me cold. Also Andreas Schmidt's Beckmesser, though well sung, doesn´t seem to come across to the (imaginary) audience (the Bayreuth DVDs are always filmed in front of an empty auditorium). Matthias Hölle in his rather short prime, is first rate as Pogner, dignified and well sung.

Is this the preferred Meistersinger on DVD? Before actually watching it, I would have expected it to be. However, I continue to place my money on the Schenk production from the Metropolitan Opera. And no: I am no fan of the endless row of undead Schenk-shows, but this Meistersinger, for once, is rather good.

Daniel Barenboim with the Meistersinger Ouverture:

A typically astute contrast of Barenboim (familiar from CD) and Thielemann (seen live in my - to this point only - trip to the Green HIll).

Emily Magee: Very curious to get a little more of your thoughts of her in this production and generally.

I liked her but was not overwhelmed by on the Barenboim Lohengrin and Meistersinger CDs. However, she did, from my perspective, steal the show as Eva in 2000 and was terrific in my one other live experience with her, again as Eva, in Florence several years later. Additionally, I thought she was a great Countess in the Barnboim Berlin Figaro DVD (notable also for Pape's Figaro - the one important role of his which I have not seen live).

I'm probably in the minority but based on these experiences I think she is very underrated singer. She has not, even with the patronage from Barenboim and at this stage in her career, appeared at the Met. Meanwhile, other, much less interesting and talented singers have taken part in her repertory.

P.S. RDS in 2000 was much preferable to Seiffert on the recording (his wife, PMS, btw, is one of those less interesting singers who seems to have a repertory similar to Magee's and will be making her Met debut this year as Elvira).

I saw this production in Bayreuth in 1998. The two first acts were almost a disaster. Robert Holl was completely uninspiring, Peter Seiffert- a great Walther, but not this evening- was visibly ill and the production had an unbearable "petit bourgeois" aspect... Before the third act, Wolfgang Wagner appeared on stage and announced that Peter Seiffert was replaced by RDS. And something happened. RDS had something to prove and the production,, which was before completely bland and meaningless, became poetic... Even Holl seemed contaminated by the general atmosphere !

I completely agree on Emily Magee and I´ve wondered why she hasn´t appeared more frequently at the major houses, Barenboim´s backing and all. She is a terrific actress and furthermore looks stunning.

Live, I´ve only heard her as Gutrune and the Rusalka-Foreign Princess, on DVD I´ve seen her in several part such as Elsa, Desdemona, Eva, Ellen Orford, Countess and Ariadne. She has never had the floating expressivity in her voice, that some seem to prefer for such parts as Elsa, Eva and Desdemona. As Desdemona she seems somewhat limited in expression which applies for her Elsa as well (also on the Barenboim recording, the only great thing about that being RP). However her voice seems to be developing in a more dramatic direction.

She is simply astonishing as Ariadne - far superior than Deborah Voigt. Hopefully her best years are still in front of her - I notice her SFO debut in Tote Stadt is upcoming.

My opinion on PMS debut as Elvira: This is orchestrated by DB as PS sings Tristan at the exact same time. Why else would they hire her, no offence?

John Relyea as Mephistopheles in the upcoming Damnation de Faust"#¤!!(I am fairly certain he was not the originally contracted singer, but nevertheless...)

No Antonacci. No Veronique Gens.

Also, Relya does, for some reason, seem to be something of a favorite at the Met. He is the worst Figaro I've heard and has not, I don't think distinguished himself in other roles.

Still, even his Figaro is quite a few notches above some of the Contesses I've heard at the Met. This again begs the queston, why no Magee (who unfortunatly seems to have dropped the role)? Why no Gens?

I always imagined Veronique Gens´ voice to be too small for the MET, but I may be completely wrong as I´ve never heard her live.

Yes I realize someone at the MET seems to like Relyea. The thing with Relyea is that he looks OK and acts rather well, he is just such an unbelievably awful singer (in pure vocal terms). He will ruin this Berlioz-Faust production, which is really a shame as it would have been the highlight of the season imo. After Karita Mattila´s Salome obviously..

I am sure you know that he will be repeating this magnificent Figaro at the MET next season. With Danielle de Niese, who is probably the worst singer to attempt Susanna at a major house, despite her looking like Jennifer Lopez. At least they´ve hired Annette Dasch as the Countess - a good choice, imo, she might be excellent.

Along the same lines it looks like Falk Struckmann will be sharing the MET-Wotans with Bryn Terfel - at least in 2010-11. Good luck..

Gens voice IS somewhat too small for the Met (her Elvira in Barcelona this year was, imo, slightly better than Roschmann's excellent rendition in Salzburg heard a few days later) but that hasn't prevented them from hiring singers whose voices are also too small but not nearly as beautiful and who themselves are not nearly as good looking. She too, as well as Magee, really LOOK that part, I think.

Don't even mention DeNiesse. I am strongly inclined to trust you on Dasch even though my one experience with her as Anna in Salzburg was very disappointing. I've read you reviews of her Elviras in Berlin and according to you she was also inconsistent although excellent on at least one occasion. Still the fact that you approved of her on that occasion (even more than the Met and Salzburg decisions to cast her) does leave one hoping.

Struckmann is really not THAT horrid but one does worry about Terfel showing up. Hopefully Pape will have some room in his calendar. In any event he's a regular guest so I'm sure he'll show up here sooner or later though one does hope to hear him in other venues as well.

"Struckmann is really not THAT horrid but one does worry about Terfel showing up. Hopefully Pape will have some room in his calendar."

Not for this. It coincides with the Berlin/La Scala production with DB, which is his first priority, as I understand it.´Apparently RP was the first choice Wotan for the MET and it looks like he is scheduled to share the part with Terfel in 2013 (as of now..).

However, Bryn Terfel is rather self-conscious as a performer, used to being the star-singer and all, and believe me, when he hears RP´s Wotan, I find it extremely unlikely that he will share this part with him, particularly at the MET, where RP is dead-certain to be the more successful interpreter for several reasons.

That apart, Terfel has actually never performed the Siegfried-Wanderer on stage, meaning he will debut the part at the MET and is bound to spend a considerable amount of time in NYC.
Furthermore, based on his present vocal state, I predict he will have his share of trouble projecting the higher-lying legato lines (secretly I think this is the real reason behind him pulling out of the London Ring). I wish they would cast him as Alberich, as I believe he´d be perfect in the part.

Struckmann´s voice becomes more and more like a charater barytone. I´ve heard him alot in Vienna recently. He´s allright in shorter parts though, but Wotan at the MET I simply don´t believe in. Wotan in Hamburg is more than enough for him to tackle, based on the radio broadcasts. As long as they don´t hire Mark Delavan, though.

Well, I really don´t care do I, as I will just go to Berlin and see René Pape...

Re: Annette Dasch - her disc of Haydn arias is quite superb, I´ll try and write something about it at some point.