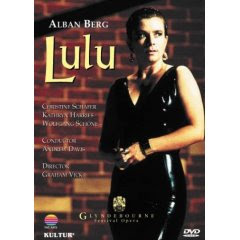 Alban Berg´s opera tells the story about the rise and fall of Lulu, not quite the femme fatale some make her out to be, but rather a psychologically damaged girl, who mirrors herself in her relationships. Her three marriages end up with three dead husbands and she ends her life at the hands of Jack the Ripper as a street prostitute in London.

The semicircular brick wall with the descending stair case and opening in the floor does not make for a particularly enticing setting, however Graham Vick explores the relations of the characters and creates such drama that one almost forgets the gloom surroundings. A black-white film during the Act 2 intermezzo shows some of the off-stage action, such as Lulu´s trial, and the story is told relatively straight-forward.

Lulu is a signature role of Christine Schäfer and seeing Anja Silja as Lulu in Frankfurt was a decisive factor in Christine Schäfer decision to become an opera singer. As a high lyrical soprano she was told to wait until at least 40 years old before taking on Lulu, nevertheless she debuted with the part in her mid-to-late 20s. In this production she is 30.
Christine Schäfer has always been a champion of modern music, with numerous collaborations with Pierre Boulez and composers such as Aribert Reiman. With her high, crystal-clear almost vibratoless soprano she effortless throws off the coloratura. With her cool and detached appearance Lulu´s transformation from girl to prostitute is entirely believable. She looks eerily attractive, in that exact way I imagine Lulu would. This is a major achievement for her in a part I believe her to be the ideal interpreter of. Furthermore she is surrounded by a cast without a single weak link.

I have never heard such dense, late-romantic Alban Berg than that of Andrew Davis with the London Philharmonics. He draws melodies from Alban Berg´s score that I didn´t even know existed in an extraordinarily powerful performance.

On DVD the only alternative is the Zurich production with Laura Aikin, a fine performance however not quite at the level of this Glyndebourne production. The only real alternative is the Pierre Boulez/Patrice Chéreau 1978 Paris staging with Teresa Stratas, unfortunately not available on DVD (yet).

Christine Schäfer as Lulu with Wolfgang Schöne from Act 1:

I globally agree with your review -a thrilling performance- but I wouldn't have given a 5 to Wolfgang Schöne. He is an excellent actor but the singing is pfff... is there any singing ?

Oh but I completely agree. Don´t know why Schöne got his own line. He was just meant to blend in with the rest (that means he still sort of gets the 5, but in a more anonymous way).

Thank you for this review. This is one of my favorite operas and the soprano is really suited to the part physically and vocally.

The typecasting is good in this opera, but of course, Lulu Schäfer is the best as she carries any personality with the same grace and sexy character. I've just "found" her but will try to get the other DVDs Waltraut Meier is beaten! Leider für sie!