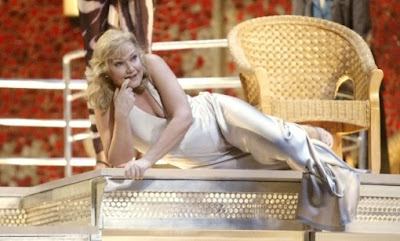 A reader has sent me this excellent live report, which I will reprint unredacted:


The Jürgen Flimm production of Salome, notable particularly for Karita Mattila's star turn in the title role, opened in its first revival in New York on September 23.

The production itself is set roughly between the wars and the action is portrayed as a party at Herod's place, set in the desert. Most of the action takes place on a glass floor with a spiral staircase at the back and Jochonaans' cistern on the right side of the stage. The principals and party guests are wearing modern dress with the soldiers sporting late colonial era uniforms. The photos above give an excellent idea of the setting. The updated setting and and costumes aside the production is faithful to the libretto and while Flimm offered no distinctive insights the direction was first rate. The production itself recieved mixed reviews originally but has worn well.

Karita Mattila portrays the spoilt, capricious princess turned psychopath magnificently. Every gesture, every move, every look, every vocal inflection captures Salome's whims, desires and descent into madness. Vocally she is quite magnificent with but a couple of minor cavils. At the beginning of the opera there was a bit of strain and sharpness in the highs and register shifts were not entirely undetectable. The midrange was spectacular throughout, the bottom of the voice fantastic when called upon and as the evening wore on the whole became a seamless, lustrous glorious instrument. In sum a portrayal for the ages.

Juha Uusitalo, in his Met debut, made an excellent Jochanaan. His warm, evenly produced large bass baritone was closer in vocal distinction to Terfel than Albert Döhmen in 2004 and he portray the prophet with considerable dignity. On this hearing he would seem to be an entirely suitable Wotan for Vienna or the Met.

Ildiko Komlosi was quite excellent vocally and dramatically as Herodias, holding a bottle neck by the napkin throughout and progressing from a light buzz to complete inebriation with great conviction. Also she looked kinda hot.

Kim Begley was fine if somewhat dry voiced as Herod.

The orchestra was its magnificent self but Patrick Summers offered somewhat less detail and perhaps intensity than Gergiev 4 years ago. He was also excessively loud in a number of passages, occasionally drowning out Mattila and Uusitalo who have more than enough voice for normal accompaniment.