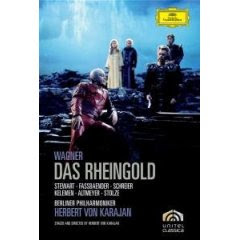 Herbert von Karajan conducted four complete Ring Cycles: 1937 in Aachen, 1951 in Bayreuth, 1959 in Vienna and 1967-70 in Salzburg. The sets of the Salzburg production, which was also directed by Herbert von Karajan were by Gunther Schneider-Siemssen, and this production was partly transferred to the MET end-60´s until a strike intervened when the project was only half finished. Gunther Schneider-Siemssen also designed the sets for the current Schenk Metropolitan Ring.

This DVD is a studio film recorded between 1973-78 in Munich. The soundtrack to the film was recorded in 1973 at the Salzburg Easter Festival during Karajan´s revival of his Rheingold, however the complete absence of audience noise suggests the recordings were made during one of the numerous lighting rehearsals, for which Herbert von Karajan was famous (he was very interested in lighting).

This lapse in time also (at least partly) explains why several of the singers were replaced by other singers in the film, due to simple availability issues. Aesthetic considerations, such as the hiring of dancers for the Rhinemaidens, probably weighed in as well. This concerned Erda (played by Martha Mödl, sung by Birgit Finnilä), Fasolt (played by Gerd Niensted, sung by Karl Ridderbusch) and Donner (played by Vladimir de Kanel, sung by Leif Roar).

Herbert von Karajan directed the film, the sets and costumes were by Georges Wakhevitch and Jean Forrester, deliberately mimicking Gunter Schneider-Siemssen´s sets for Karajan´s previous Salzburg production. By the time the Rheingold film was completed in 1978, Unitel had aborted the plan of filming the entire Ring Cycle, a decision Herbert von Karajan no doubt was in agreement with as he had more than enough money to sponsor the completion of the project had he wished to do so.

The play-back is, as always, one of the weak points of this film. Unfortunately, there are several far weaker points to chose from:

First of all, I am uncertain as to what exactly Herbert von Karajan´s contribution as a director consisted of. The singers seem to have been simply placed in middle of the traditional sets and then abandoned standing there. There is no interaction between the characters, no drama whatsoever in this immensely static prodution. In short: No sign of any attempt of stage direction. I believe Herbert von Karajan´s goal as a stage director was to create an appropriate background for the music, which is very admirable, but unfortunately also very boring to watch.

Secondly, I would assume one of the reasons behind filming Rheingold would be the possibility to use special effects for some of those scenes which are virtually impossible to carry off convincingly in the theater such as Alberich´s transformations.. And while the Rhinemaidens seem to swim in the bottom of the Rhine, Valhalla is even more static here than in the theater and the transformations of Alberich are simply pathetic, even taken into consideration the age of the film.

While some of the singers are rather good actors (most notably Brigitte Fassbaender and Peter Schreier), Thomas Stewart´s Wotan is woodden and stiff like few others. That Gerhard Stolze´s Mime is a bit stiff as well, is rather understandable as he contracted polio during the recording of the Solti Siegfried some years earlier.

A moderately interesting document as the only Karajan Wagner filming available, but no more than that.

The descent of the Gods into Nibelheim: