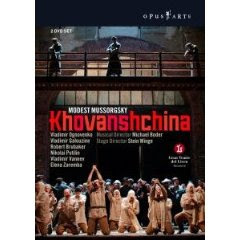 Norwegian director Stein Winge stated that he did not intend to modernize or revolutionize Khovanshchina "because it makes no sense to stage a historic Russian production for a non-Russian audience and because we think it helps to focus on the fact that history tends to repeat itself". The action is transported to the 1950´s. The period costumes are retained, however the sets are spartan and dark. Shaklovity, the Chief of Police is the main culprit, appearing throughout the opera, whether singing or not.

Some of Winge´s ideas are rather enticing: The opera opens with corpses hanging from gallows on the foggy Red Square. Ivan Khovansky carries a red dwarf with him everywhere (who plays a central role in his death scene), the collective suicide of the Old Believers takes place as they, all dressed in white, blow out their candles.

In all fairness, I´ve read very favorable reviews of this production. But I must admit to finding it rather uninteresting and unmoving. The reason? Probably because most of the power of Khovanschina comes from the music, and here the very competent Michael Boder faces the competition from the mighty Claudio Abbado on both CD and DVD from Vienna State Opera. In comparison, Michael Boder seems rather bleak, as does everyone else in my opinion. To expect him to match Claudio Abbado would indeed be unfair, but such is the market of recordings: You have to compete against all the big names of history...

Musically, Michael Boder´s version is based on the Shostakovich orchestration with Voronkov´s ending, but with elements also of Stravinsky and Rimsky-Korsakov throughout the opera. The slow fading of Voronkov´s ending sets it apart from that of Stravinsky (used by Claudio Abbado). Furthermore, Michael Boder has shortened the score somewhat in order to maintain a dramatic line, by removing scenes such as the one between Marfa and the old woman Susanna. Honestly, I prefer the complete version.

Ultimately I find the production unengaging, not least since the protagonists are all rather uncharismatic, which is particularly problematic for Ivan Khovansky. A great Ivan Khovansky need charisma. Vladimir Ognovenko does not have a great voice either. The same applies, more or less for Vladimir Vaneev´s Dosifei. Also Elena Zaremba disappoints with an intolerable vibrato as Marfa, no matter how deeply immersed into the character.

The Claudio Abbado-conducted Kirchner production from Vienna State Opera 1989 remains the preferred Khovanshchina on DVD. However, look out for Dmitri Tcherniakov´s riveting interpretations in both Boris Godunov and Khovanshchina, which will hopefully become available on DVD in the near future.

Tons more drama than the current Met production, and certainly a far more interesting realization of the final scene. And Vladimir Galouzine, the finest Russian tenor of our day, deserves a mention in this cast.