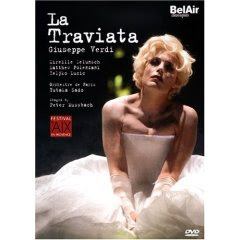 This is without doubt Peter Mussbach´s finest staging presenting La Traviata as Violetta´s road to death. Or perhaps as Violetta´s recollection of her past life as she fades away.

The stage is almost bare - we see the neon-stripes of a highway with a superimposed tunnel glowing unnaturally in the dark. The road to death, apparently. The fluorescent lights make the white dress of Mireille Delunsch glow unnaturally, mimicking a corpse or a drug addict, indeed looking truly sickening. At several points the eerie fluorescent dress appears suspended in the air. Violetta is on stage during the entire opera, fading in and out among the other characters. The contrast between Verdi´s music and this the sickly atmosphere is astonishing.

Mireille Delunsch is utterly convincing as the fragile, transparent and fading Violetta. Vocally she may be rather dry, but she compensates with her superb acting. Matthew Polenzani and Zeljko Lucic are rather traditional as Alfredo and Germont pére, respectively and Sado conducts an efficient, though not memorable performance.

What makes this production (which may also be seen at the Berlin State Opera, where Christine Schäfer was a superb Violetta a couple of seasons ago) superb is Peter Mussbach´s brilliant concept. While Peter Mussbach´s productions are always aesthetic, they more than occasionally lack dynamic drive, however this is not the case here.

This will not be a Traviata for everyone. For a traditional La Traviata I´d strongly advice to look elsewhere. Such as here.

I decided to look at this DVD until the end.

1. Apart from Violetta’s white dress, my screen was mostly black, from time to time crossed by a nauseous green light. I think we are effectively supposed to imagine a highway to death. But I don’t want to imagine. I want to FEEL it and as there is no attempt to make the situation on stage match anything you can find in the libretto...

2. P. Mussbach has found the choir in a Berlin cabaret and has put it on the highway. Those poor people seem lost…

3. Matthew Polenzani has a scratched cardboard for a voice and looks like a well-fed Nosferatu…

4. The guy who is singing Germont has not the slightest of idea of the kind of character he is supposed to impersonate. So he has no credibility at all. And no voice to speak of.

5. Delunsch looks like an ugly Marilyn sucked dry by the vampire (I am fed up with Marilyn and I do not think TB is a good pretext to tell us a vampire story). She makes awkward gestures with her hands throughout the opera and looks at you with fried fish eyes. And she has borrowed the vampire’s teeth.

6. SHE HAS NO VOICE ! I have never heard in my life such a bland, superficial, shallow Violetta. The medium is without any depth. The high notes are unbearable. She has no idea of the way to attack the italian consonants... I even prefer Fleming !

7. I am going to drink a glass of scotch, I don’t feel well.

Well, I never said any of the singers were particularly fabulous. But the production is great.

Mireille Delunsch really DOES look like a vampyre, doesn´t she?

Just got back from seeing this. The voices esp. Violetta & Giorgio; excellent.
The direction is one of the worst I have seen in Opera in over 20 years.
It's like the Adams Family performing La Traviata.
There is no eye candy, no surprises, everyone is in black and un-choreographed. It's like the director Peter Mussbach phoned this in. In the final aria the doomed lovers don't even look at each other and what is with Viloetta falling on the floor every 40 seconds? And the never ending disco lights, a total nightmare. You might as well stay at home and just listen to a recording, because what you see on stage is not worth the trip or the expense.