DVD: Natalie Dessay as Manon - with Rolando Villazón from Barcelona 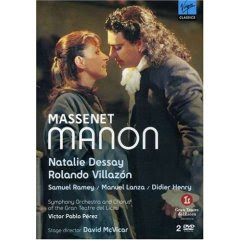 Renée Fleming, Natalie Dessay and Anna Netrebko now appear as Manon on DVD - all superb in three different productions, that seem tailored to the individual strenghts of each soprano.

David McVicar has cimply created a superb production of Manon for the Barcelona Liceu, which brings out virtually all the strenghts of Natalie Dessay.

David McVicar captures the spirit of 18th century Parisian decay as I´ve never before seen it on stage. With the sets looking most of all like a Spanish bull ring, the atmosphere of smokey French backyards is unbeatable with all characters wearing realistic (as opposed to sumptuous) period dress. David McVicar clearly intends this a condemnation of 18th century French high society.

This hazy, and ultimately very French environment, seems perfectly suited to Natalie Dessay´s petite Manon: Vocally her top may be rather thin and occasionally she tends to push for the notes to the point of almost shrieking and she is probably over-challenged vocally as Manon. But as an actress portraying the development from naive country girl via femme fatale to the grown-up woman in the end she is unbeatable.
And in Rolando Villazón she has the ideal stage partner, showing just as superb chemistry here with Dessay as with Anna Netrebko in the Berlin Manon DVD. Again, Villazóns neurotic hypomania seems entirely believable characteristics for des Grieux. Vocally he may not be entirely on top of his game though. Unfortunately it is far too late for Samuel Ramey to make an impact as Comte des Grieux.

For those looking for a sumptuous, traditional Manon production, this is NOT it. But it is highly recommended as one of David McVicar´s best stagings and superb as operatic theater. Extensive rehearsal footage is provided with the DVD.