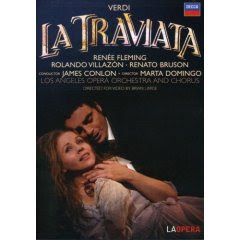 As opposed to the other La Traviata DVD´s I have recommended (Willy Decker´s Salzburg production, Peter Mussbach´s Aix production and Robert Carsen´s La Fenice production), be warned: This IS a traditional production of La Traviata.

And I find it superb mainly due to Renée Flemings fabulous Violetta and the almost as convincing Alfredo of Rolando Villazón.
Almost everyone has an opinion on Renée Fleming. And if not in possession of one already, this DVD may be a good place to start to form one.

First of all: I am not even sure I like the way Renée Fleming sings in this production. Ideally I´d like her to sing more straight as opposed to her sliding attack on the notes, and more natural (although I find it difficult to concreticize) but as an overall stage portrait she was mesmerizing.
What, in my opinion sets her above contemporaries like Anna Netrebko´s also superb Violetta is her grace and poise, though I perhaps may prefer Anna Netrebko´s singing, if only the vocal aspects took the stand here. Renée Fleming is simply heart-breaking. Her entire presence, in my opinion, makes her the most moving Violetta on DVD (among several greats, admittedly).
And with her, Rolando Villazón seem able to down-stage his hypomaniacal acting, making this a superior Alfredo than on the Salzburg DVD with Anna Netrebko.

Rolando Villazón is emotional as well as highly sentimental, both qualities I genuinely dislike, however they come with this likeability-factor, that sets him apart from most, if not all, of his contemporary colleagues. That I personally would never have fallen for this emotional-sentimental Alfredo is besides the point, I suppose. The point is, that it is entirely believable that Violetta falls for him. Furthermore he has superb chemistry with Renée Fleming at least equalling his partnership with Anna Netrebko.

Dmitri Hvorostovsky cancelled his participation in this productton and instead we got Renato Bruson´s wooden-voiced, but otherwise convincing Germont pére.

Marta Domingo´s production is entirely traditional and will offend no-one, I believe. Neither is a particular analysis warranted.

For those inclined towards traditional settings and who do not belong to the anti-Renée Fleming camp, this is genuinely recommended.

Interesting comparison of DVDs!
Worth pointing out that Renee Fleming sings Violetta at Covent Garden this season.

Also, perhaps notable exception from your reviewed list - Gheorghiu/Solti DVD - wondering if there's a reason behind the exclusion?

The choice of Traviata´s was purely arbitrary. The reason for exclusion of Gheorghiu/Solti is simple: I don´t remember it well enough to write about it without watching it again. Actually I didn´t remember it at all when writing these posts..

It does make sense in a sort of compare-the-great-sopranos-of-today way to write about Angela Gheorghiu´s Violetta as well. I´ll try and get around to that.

only 3 points for Brusson? I liked him in this very much.
asperias