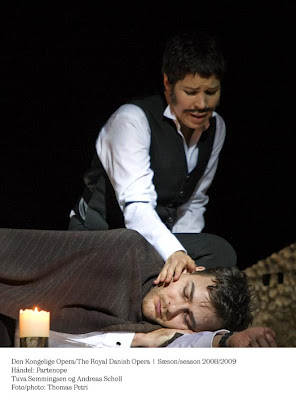 Last Friday (October 24th) I attended Francisco Negrin´s new staging of Partenope at the Royal Danish Opera for the second time, as I also was present at the premiere.

During the entire run, the performances have been plagued by illness - for the first couple of performances Andreas Scholl sang through a cold, and immediately thereafter Tuva Semmingsen was replaced by Trine Bastrup Møller due to illness. Finally on the Friday´s performance (the second-last of the run) all singers were well.

As I skipped over him at the premiere, where he was indisposed, I´ll just write a couple of words about Andreas Scholl, now where he is well:

First of all, Andreas Scholl really is a remarkable singer, with star quality as only a handful of his colleagues, regardless of voice type. Technically he is superb, with a quite distinguished sound I have heard describe as "white". Furthermore his coloratura technique is simply stunning. Last, but not least, he has a wonderfully masculine presence on stage, despite his part, Arsace, being something of a wimp. And he looks rather dashing, not to forget..

Much praise also to Christophe Dumaux, who has a somewhat deeper and also, it seemed, bigger voice than Andreas Scholl.

And to the rest of the team and the director etc., who performed at the same high level as in the premiere making 3 hours of Händel fly away.
Posted by mostly opera... at 22:26

Scholl is the one countertenor i admire and have know about for years. Love his rich voice. so unusually warm for that type of voice. And his singing always come over totally masculine, which again is remarkable. I definitely should make an effort to catch him live :-)

Dumaux was nice and his voice beautiful, but I prefer Scholl to all other countertenors because his singing is positively masculine (probably because of very little vibrato).
And he's gorgeous...

Have you ever heard David Daniels? The most beautiful countertenor voice ever - extremely handsome and amazing on stage. He sings Arsace in Vienna in February.

Not yet live - hope to catch him at one point..

He is worth ANY journey!