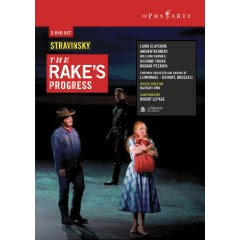 Robert LePage´s production ot The Rake´s Progress is both extraordinarily imaginative and well-thought out, set around the time and place it was written – Hollywood 1948, using the American cinematic language of that time. Stravinsky´s neoclassical take on the Faust legend sprinkled with biblical mythology is told rather straight-forward, the symbolism made clear from the opening scene presenting Adam (Tom Rakewell ) and Eve (Anne Trulove) making out on a carpet, God (Anne´s father) giving Adam advice and the Devil (Nick Shadow) popping up from underneath.

The Hollywood setting resonates surprisingly well with Stravinsky´s musical texture as well as with the drama: Simple on the surface but with danger lurking just underneath. Scenes such as Anne Trulove driving up in front of the movie theatre as Tom and his new wife Baba The Turk arrive for the opening night celebration of the movie “Tom Rakewell and Baba The Turk – A Nick Shadow motion picture” is simply extraordinarily well thought-out. Tom Rakewell, the actor, rococco-outfit sniffing cocaine in front of his inflated silver mobile home on a movie location. Tom and his bearded wife Baba The Turk on the terasse besides the big pool. I simply cannot imagine a better production of Rake´s Progress.

That Tom Rakewell is a rather weak character, whose demise is more of his own making than of Nick Shadows is quite obvious and Andrew Kennedy embodies him almost to perfection, vocally as well. It´s equally obvious that Anne Trulove is truly as good as her name implies, and the fine Laura Claycomb succeeds in conveying all this goodness without becoming irritating. William Shimell is Nick Shadow, underplayed as he should be. Kazushi Eno brings out the lurking eeriness of the score.

This is a coproduction including Opéra National de Lyon, San Francisco Opera, Royal Opera House Covent Garden, and the Teatro Real in Madrid, where this staging has been/will be seen in recent past/future seasons.

Robert LePage is the man behind the new Ring at the Metropolitan Opera. He might just be the right man for the job.

Funny how, when I saw this piece in Lyon a while ago, I was not convinced at all by Lepage's view...

I enjoyed this production when it was in San Francisco last year. It had a few weaknesses, but I am looking forward to LePage's Ring.

Honestly? Everything.
I find the production very static, and I'm not a big fan of the iconography Lepage choose.

I'll admit not liking the music of Stravinski obviously doesn't help, but still. I don't know if it's because I saw the production live, but Lepage's staging is ultimately odd to watch live. He has a strange way of apprehending perspective, for instance.

The Cowboy theme was also a big issue for me; the redneck theme does not appeal at all to me (I've already said the same about the recent Forza del Destino in Vienna).