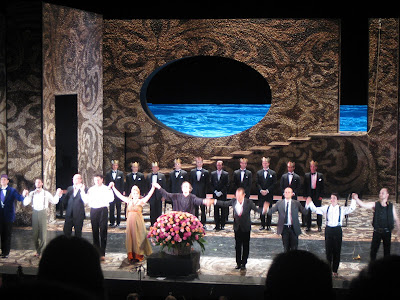 The poor stage manager was truly overworked at the premiere of Francisco Negrin´s new Partenope production for the Royal Danish Opera. First she had to announce the partial indisposition of German counter-tenor Andreas Scholl, singing with a cold. Half an hour later, the red curtain was lowered mid-performance due to technical problems as Partenope and Armindo were on the verge of being crushed by some incontrollable stage walls...However after about 5 minutes, the problems seemed solved and the performance continued.

Francisco Negrin´s staging is minimalistic, with brownish stone-mosaics providing a continuous backdrop to the modern-clad characters. It is a comic opera, but Negrin never resorts to crude humour or slapstick comedy. Rather it is underplayed and sweet as well as funny, entertaining and moving. Negrin´s major strenght is the individual direction of the singers, as soloists or ensembles: It is quite simply very, very good. Time flies with this Partenope.
On top, Negrin communicates his ideas so clearly that no previous familiarity with the work is needed to follow the story-line. He doesn´t seem to have any external "concept" - the story, surprisingly "modern" is told straightforward, exploring the emotions and interactions of the characters. Obviously Negrin is helped by a libretto with almost Shakespearean qualities. It is outrageously entertaining. But also immensely insightful.

Tuva Semmingsen´s Rosmira was simply wonderful - she has the exact mezzo-coloratura and superb acting skills to pull this off at the highest international level. Inger Dam-Jensen delivers a very nuanced portrait of Partenope and looks smashing as the femme fatale - no wonder all the male characters fall for her. Vocally she is rather overchallenged, and perhaps this part simply needs a more dramatic voice (she is a lyric coloratura).

Andreas Scholl looks absolutely dashing as well as sweet. Audibly indisposed, singing at mezza-voce throughout (oddly fitting for Arsace, a wimp), but a great comedian and presence on stage. Furthermore, had he cancelled, I doubt the premiere would have taken place.
Christoph Dumaux had a somewhat deeper countertenor with plenty of ring to it, in another top-performance. Also great performances from Palle Knudsen and Bo Kristian Jensen, the fist appearing twice on the first balcony, firing himself down on stage with a rope.

The real star of the evening however, was the incomparable period-specialist Lars Ulrik Mortensen with an outstanding performance from the period ensemble Concerto Copenhagen. This music simply cannot be performed better than with the Mephistophelean-looking Lars Ulrik Mortensen and his band. Exctiting recitatives, razor-sharp precision and impeccable coordination. But most of all, lively and energetic.
I just read that the ensemble is currently experiencing economic difficulties. Hopefully temporary. The ensemble is absolutely indispensable on the Danish as well as on the international early music scene. 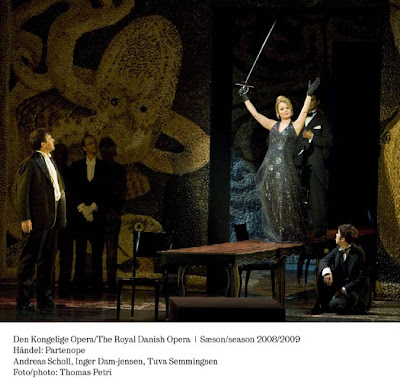 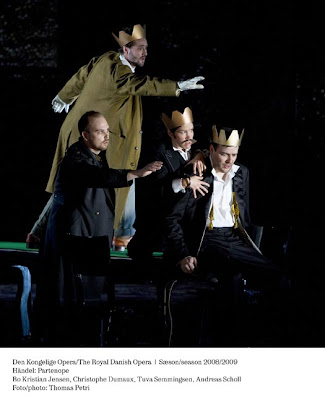 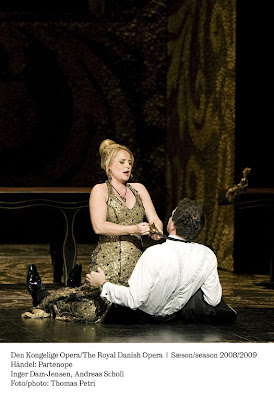 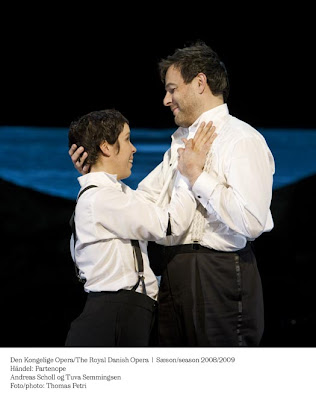 Hi, have to give you credit for a well kept blog! We saw the same Partenope performance and seem to share the same view. Your blog actuallý inspired me to write my own opera and classical blog. Although I seriously doubt that I'll update as often as you! keep it up!