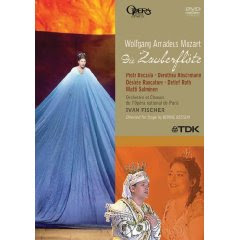 The Swiss director Benno Besson who died in 2006, was previous director of the Volksbühne Berlin and collaborator such notabilities as Bertold Brecht and Heiner Müller. However, these are obvious influences in this Magic Flute staging at the Palais Garnier (Paris), in which Besson quite simply created a fairytale for children.

Personally, I find David McVicar´s production more charming and Audi´s more stunning. However, children may well like this one the best.

Musically, it is superb, mainly due to the both vivid and interesting reading of Ivan Fischer. I´d give one star for the ouverture alone.
Of the singers, Dorothea Röschmann was clearly the best in her second Pamina DVD and Desirée Rancatore was clearly the worst. The rest were fine, though unspectacular, though Matti Salminen does deserve special mention for his noble Sarastro.

Pamina is, I think, is easily Roschmann's best role although she was also quite exceptional as Susanna. A very good Ilia, Countess and Elvira but not quite at the level of the former roles.

I actually find Dorothea Räschmann´s best roles to be Fiordiligi and Vitellia - she is absolutely stunning in both parts on DVD, where she gets to display more of her dramatic skills than in Pamina. There is a certain robustness to her voice which suits these parts excellently, imo.