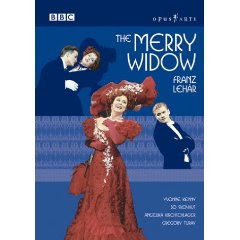 This is Lotfi Mansouris last production after 39 years with the San Francisco Opera, general director from 1988-2001. An entirely traditional production, applying grand opera to The merry widow and brought to life mainly by the superb acting skills of the involved singers. Individual taste will decide whether this is the way of the merry widow or not..

Both Bo Skovhus and Angelika Kirchschlager were in splendid voice as well as being superb comic actors. So was Yvonne Kenny, who has a very beautiful timbre to her voice, though perhaps not the plushness ideal for the Widow. Additionall, she looks more like Bo Skovhus´ mother than his future wife..

All of the supporting cast equally was up to the task. As was conductor Kunzel, providing a vivid accompaniement.

New and funny dialogue was provided by Wendy Wasserstein. Sung in English, it was apparently decided that providing English subtitles were not necessary to understand what was going on (they are...).

Bo Skovhus is worth his weight in gold. Infusing his character with life and drama through his beautiful, expressive singing and costly acting. Successfully imparting the impression that for Danilo really everything is at stake - though he is not very eager to admit it.