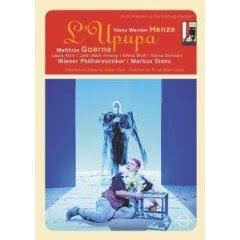 Hans Werner Henze was primarily inspired by the upupas (hoopoes) flying above his olive grove and furthermore felt very close to Mozart during the composition of what he “knew would be his last work for stage” according to the booklet. Not so, as documented by his Phaedra of last season. L'Upupa and the Triumph of Filial Love was commissioned by the Salzburg Festival 2003.

Hans Werner Henze was also responsible for the libretto for this “German comedy in 11 tableaus” – a mix of 1001 Nights and The Magic Flute based on half-imaginary Arab and Persian legends.

We are introduced to the good Prince Kasim (the oriental Tamino) burdened by two useless brothers. Kasim travels the world to bring his father a golden bird – the hoopoe (upupa in Italian). During his adventures, he falls in love with a princess, Badi´at .. etc. etc. (the oriental Pamina), held captive by Dijab (the oriental Sarastro), to whom the Princess even says “Herr, ich bin zwar Verbrecherin”, when she is caught trying to escape. However, the oriental Sarastro is an even better man than Schikaneder´s and sets the pair of lovers free immediately.
In all this, Kasim has secured the help of a curious Demon (closer to an oriental Papageno than a Méphistopheles). The black-tattoed Demon comes in handy when Prince Kasim´s useless brothers finally throw him and the Princess into a well. Finally justice prevails and the brothers are expelled from their fathers realm after a situation involving a magic chest with malicious gnomes. Prince Kasim is now theoretically able to marry his princess, however to fulfil a promise to the Demon he has to set out again, leaving the Princess behind with his father as well as leaving the end of the story open.

For those looking for deeper meanings, the best bet evolves around Henze´s exploring of the various kinds of love: Between family, friends, spouses and also for the arts (represented by the symbolic bird, which refuses to be held captive).

The Demon is by a considerable margin the most interesting character in the opera and is given a striking portrayal by John Mark Ainsley. Matthias Goerne sings beautifully as the saintly Kasim, an extraordinarily boring character by Henze´s hand. Matched by the slightly less boring Princess Badieat el-Hosn in Laura Aikin´s fine interpretation. The excellent Hanna Schwarz is seen in a small trousers role and Alfred Muff is equally convincing as Prince Kasim´s father.

The staging is by Dieter Dorn, using a virtually naked stage, evoking the Arab wold with very few symbols and bright colours.

Hans Werner Henze´s soundworld is unmistakably his own and despite the massive orchestral apparatus (quadruple wind, seveal pianos, five percussionists) as well as taped sounds of beating wings etc., there is an almost chamber-like clarity to his music and a very slim soundworld is created, perhaps intentionally, mimicking the Singspiel genre. Which is probably the main reason I will never love this work, though I admire it. The music is clearly not simple, though it may seem so on the surface.

I have this laying around my house. Maybe I should watch it.