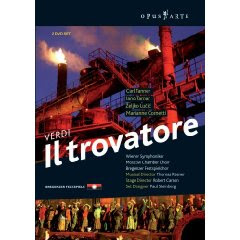 This spectacular production of Il Trovatore is set on the famous floating stage of the Bregenz Festival. The huge multistory set is in fact an island occupied by a huge petrochemical plant continuously spouting fire.

"The inner world of Il trovatore is not logical, not rational", director Robert Carsen says defending the libretto of Il Trovatore, which he finds vastly underrated. "There are more than one hundred references to fire in Cammarano´s libretto for Il trovatore" he says and continues to elaborate on the role of fire in gypsy culture.

The characters inhabit various parts of this petrochemical plant with towers like a medieval Spanish castle, a metaphor of society. In fact, this approach works rather well. Gypsies appear from underneath the plant, living on the fringes of a machinegun-guarded society. Manrico arrives by speed-boat. Leonore arrives in a fancy limousine and party dress. The singers traverse the petrochemical plant, climbing precarious metal ladders. There is plenty to look at and the action never seems to stop.

Unfortunately, the musical aspects of the performance is rather far from first-rate. None of the singers are really top-drawer: Zeljko Lucic is competent, but rather boring. Carl Tanner borders on the disastrous. Iano Tamar does look the part but is rather bleak. Marianne Cornetti is competent, but ultimately too anonymous. Same goes for Thomas Rösner in the "pit".

However, the Bregenz floating stage is unique and Robert Carsen has successfully adapted this spectacular production to the conditions provided here.