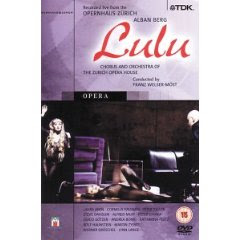 This is Sven Bechtolf´s first opera staging, a source of stress to conductor Franz Welser-Möst until he met Bechtolf at the first rehearsal, the latter arriving fully prepared and familiar with the opera from A to Z, including the score.
Quite possibly, this is also Bechtolf´s best staging to date, at least the best I am familiar with. In the accomanying 30 minutes documentary, we hear about all the fun the cast seemed to have had during rehearsals, and they do indeed seem a very solid team. All singers are equally fine actors as singers, a prerequisite for success (in any opera, really)..

Becholf´s Lulu is a girl abused by Schön at the age of 12. As a consequence of this abuse she mirrors herself in the men around here. Eerie film footage to that effect is shown at interludes, and Bechtolf illustrates this split-personality by introducing the body double, to be used extensively in his later Pélleas and Mélisande staging. Another idea, frequently used in his later productions, are leaving characters confined to wheelchairs, probably symbolising psychological immobilisation/isolation.

When Lulu is killed by Jack the Ripper/Schön in the end, a child doll is killed first and Lulu is then dragged into the corner and covered by litter. The message is clear: Lulu was killed years ago, as a child. Only her shallow surface has remained.

In Laura Aikin Bechtolf has a superb performer, giving everything on stage, including semi- nudeness in what may be her finest achievement as yet.

Franz Welser-Möst, as always, is far more than merely competent, however when he has to compete against Boulez and Andrew Davis it´s hard not to somehow end up with the shortest straw.

Overall I´d still prefer the Glyndebourne production with Christine Schäfer provided the Boulez/Chéreau Paris production will not be released, but this Zurich production is highly recommended for an alternative take on this fascinating work.