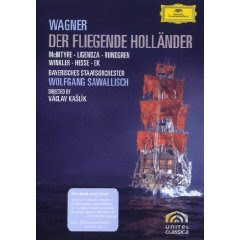 For those going regularly to the movies since the 1970´s, this Flying Dutchman may not be an easy watch. Neither is it unwatchable and at any rate much better than Herbert von Karajan´s filmed Rheingold from around the same time.

The 19th Century period sets and costumes are part of a setting as realistic as an indoor seastorm is capable of being... The mighty ocean waves and tempest-swept ships were filmed in two massive water tanks and admittedly, the indoor shooting takes some of the point out of making a Flying Dutchman movie in the first place.

That apart, the sets are rather evocative and much of the essence of the work is captured, though Václav Kaslík must have come close to blowing the budget on dry ice for his excessive expressionistic use of smoke.

The lip synchronization is rather bad and I cannot help thinking that if singers do not actually sing in a movie, why not replace those who cannot act (read: Act well) with real actors? Especially Catarina Ligendza´s blank-faced Senta comes to mind, furthermore she seems to have considerable trouble with the high tessitura as well. In that respect she is matched by Hermann Winkler´s Erik, but considerably overmatched by both Donald McIntyre´s first-rate, firm (though slightly dry) Dutchman as well as Bengt Rundgren´s Daland.

The conducting of Wolfgang Sawallisch is quite simply spectacular and the highlight of the performance. Swift and on the move from start to finish in a grandiose performance from the Bavarian State Orchestra. Sawallisch conducts Wagner´s earlier version of the score as performed in the Dresden premiere with the so-called “blunt” ending of the ouverture and without the Tristan-inspired redemption music.