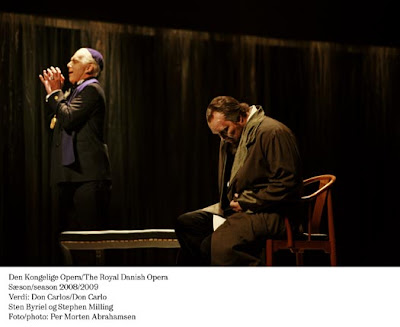 
Last year, Morten Messerschmidt, member of the Danish Parliament representing the rightwing party Dansk Folkparti (tr: Party of the Danish People) made the unfortunate decision to become dead-drunk during a party in the Copenhagen Tivoli Gardens and according to some eyewitnesses “make Nazi greetings and sing Nazi songs”. Something Morten Messerschmidt and other eyewitnesses denied (although he admits to being dead-drunk and perhaps not remembering the exact course of events), claiming they only shouted “Deutschland, Deutschland über alles” as a harmless joke. Nevertheless a joke gaining him a considerable amount of negative publicity as well as being expelled from his party, though he was later readmitted.

Now Morten Messserschmidt tries hard to create controversy in areas less related to such leisure-time activities. Such as opera where Morten Messerschmidt attended the premiere of Kasper Bech Holten´s new production of Don Carlo last November at the Royal Danish Opera. So did I.

Subsequently this staging, for rather obscure reasons has been surrounded with controversy. Some of it initiated by Morten Messerschmidt´ letter to a major Danish newspaper, in which he
complained about the allegedly unacceptable (ie. different from his own) political views put forward. Morten Messerschmidt´s main point is that the Royal Danish Opera is financed by the Danish tax-payers (true) and subsequently should refrain from politically flavoured productions. In fact it is a rather non-debate as far as I am concerned. Of course Kasper Bech Holten´s staging discusses the political aspects of Don Carlos. Why else stage it?

I described Kasper Bech Holten´s production in detail after the 2007 premiere, and not much has changed. I still find it one of his most successful productions.

Irrelevant quibble aside. Musically it was a major success.

The Filippo-Posa constellation was just unbelievable. Stephen Milling is simply staggering as Filippo. His voice is rather rough, but his portrait of the ultimately insecure monarch is immensely consistant and nuanced. And ultimately very, very touching. Furthermore the middle and lower register of his voice projects like a loud-speaker with a power exceeding anything I have ever heard in that, or other basso parts, for that matter. Stephen Milling is a very close contender to the throne of Spain. That the Grand Inquisitor was completely overpowered was rather expected.

This high level continued with Danish bass-barytone Johan Reuter, who was quite simply the best Posa I have seen or heard on stage. Currently Johan Reuter is venturing into the dramatic bass-barytone fach with upcoming performances of Orestes and Flying Dutchman, so Posa is actually one of his “easier-for-the-voice” parts. As opposed to most Posa´s, who are overstretched lyrical baritones, Johan Reuter clearly does not dig into his reserves but has the necessary vocal surplus to make the part sound easy. Furthermore he effortless projects his voice evenly throughout the range and he is a great actor completely believably as the nerdy Posa. The confrontation between him and Filippo is the highlight of the opera.

Susanne Resmark, also embarking on an international career, is physically perhaps not the most convincing Eboli, though her stage presence is immense and vocally she negotiates the part as well as anyone. In fact better than anyone I remember having seen live.

The Carlos-Elisabetta pair did not quite perform on this high level, though they were nevertheless more than fine. 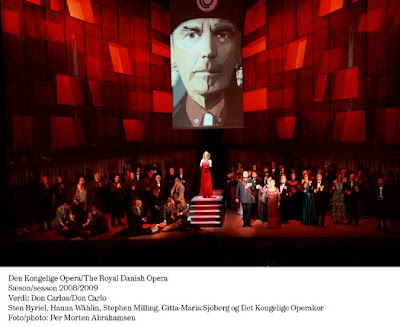 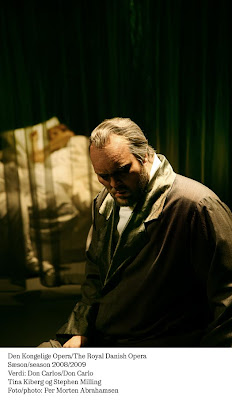 I attended the 4th october performance.really i totally agree with u.i knew that milling would be superb.but reuter was unknown to me and he surprised me.just perfect.i read about him in the net and he has done a lot but i think he ll manage many more in the future.as far as it concerns the political aspect,simply i liked it. Dryiapud

I thinks it amazing that Copenhagen can produce such marvelous singers. What I could see, there was only one guest, the Tenor.
And he was not the best one.
I totally agree, Herr MIling and Reuter are very ggod singers and actors. Both suited for the biggest houses in the world.
But what I dont understand, why do you neglect Susanne Resmark.
Personaly if think she got one of the most beautiful voices in our time. Her Eboli, well I havent heard och seen such power on stage in that part for many years.
And she in hardly never to low on the middlevoice or the high voice.
Yes she is big, but beautiful, have yoy seen her as Erda in Rheingold, her face is fantastic.

On sunday I saw Lohengrin in the Deutsche Opera Berlin.
Both Frau Resmark and Herr Botha are big. ( perticular Herr Botha)
But I really dont care, I havent heard Ortrud sang so beautifull and powerfull since Christa Ludwig sang this part.
And Herr Botha.. great.