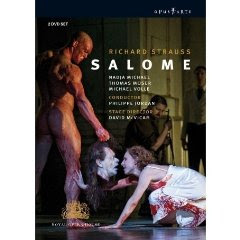 David McVicar´s Salome production for the Royal Opera Covent Garden was inspired by the 1975 Pasolini movie "Salò or the 120 Days of Sodom" (based on the Marquis de Sade novel), and is an eerie mix of external political contexts and internal sexual perversities, including child abuse.

We are presented with a sort of upstairs-downstairs setting of a European wealthy palace of approximately 1938, the stage horizontally split in two. The party initially taking place “upstairs” with the rich and their guests, while Jochanaan is imprisoned in a cellar below the “downstairs” bathroom/basement level of the servants. A decadent society on the verge of a break-down.

The entire atmosphere of the staging is eerie and David McVicar succeeds in creating an atmosphere of looming premonition, so essential for a successful Salome. His use of symbolism is visible but not obtrusive - an example: Herod killed Salome´s father, who was imprisoned in the same cistern as Jochanaan, which initially spurs Salome´s curiousity (as opposed to sexual attraction) towards Jochanaan.

In the very well-executed dance of the seven veils, we are led into seven consecutive rooms (of Salome´s mind) in a series of strong images evoking Salome´s prior sexual abuse by Herodes. Nudity is represented by the naked executioner, sprayed with blood (in real-life this man works just outside as a "living statue" at the Covent Garden market). The final scene is played out conventionally, between Salome and Jochanaan´s head, but nevertheless leaves a strong impression.

There may never have been a better-looking Salome on stage than Nadja Michael. Her past as an East-German swimmer does pay off, and apart from looking absolutely stunning she moves superbly on stage and has great dramatic expression.
Unfortunately, Nadja Michael is vocally severely overchallenged. Her high notes often comes out as shrieks and she is almost half a note flat on several key points. While she does manage to hit quite a few of the high notes cleanly, she pays the price with an obtrusive vibrato on the floating notes just below the top (and there are a lot of those floating notes). As a vocal performance I find it very difficult to listen to.
However, it is not as if there are a lot of vastly superior Salome´s to chose from, Karita Mattila apart. With Nadja Michael´s physical advantages it is an obvious part for her to take on, but her voice still seems more like the pushed-up mezzo (that she was) than the dramatic soprano, she seems intent on becoming. Obviously, her voice may project better in the house and indeed she is judged an A-rate Salome with performances both at La Scala (to be released on DVD as well), Covent Garden and San Francisco opera these seasons.

Michael Volle is both physically and vocally a close-to-ideal Jochanaan, perhaps the finest overall performance. Though Thomas Moser is extremely well suited to play this extraordinarily despicable Herodes - you believe this man to be everything David McVicar insinuates he is. Michaela Schuster is, for once, a Herodias in her vocal prime, however she didn´t seem at ease with the part.

Imaginative reading from Phillippe Jordan in the pit, though ideally I´d like a bit more punch to it.