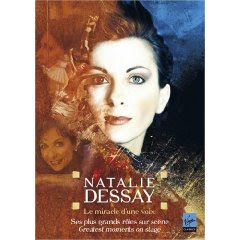 For Natalie Dessay, opera is as much theatre as music, clearly evident in the 13 video clips of virtually all her major roles 1993-2003.

There is something so very French about Natalie Dessay (who is from Lyon, which may explain the many clips from the Lyon Opera), who appears to be very straight-forward and honest as well as funny. The only problem with this DVD is that it appears rather disorganized - ideally I´d have preferred the clips to be chronologically organized, instead of mixed in no apparent pattern. Natalie Dessay gives a short (optional as well as excellent) introduction to each piece.

Even for those not particularly interested in Natalie Dessay, this DVD provides a very interesting documentation of her vocal development, with particular reference to her vocal troubles including surgery on the vocal chords, beginning 2002.

We hear the lush, unrestrained beauty of her voice in the early 90´s (1993 Frühlingsstimmenwalzer (Vienna), Olympia (Lyon), 1994 Les enfants des sortileges (Lyon) and Magic Flute (Aix)).
It is obvious that Natalie Dessay´s voice has lost much of it´s glow at the end-90´s with a drier sound. This development is already audible in the excerpts from the 1996 Olympia (Vienna State Opera) and continues with the 2000 Orange Olympia, 2001 Salzburg Zerbinetta, 2002 Lyon-Lucie, 2003 Barcelona Hamlet and Paris Zerbinetta 2004. In the middle of which she had surgery on her vocal chords.

Her highest post-2000 notes are often mimicking screams, and even the way she sang in 1995 appeared unhealthy. That said, she was in splendid voice for her 2003 Ophélie, complete with blood dripping down her dress. And dramatically, she seems to continue to grow. 100% committed acting she has always provided. You may like her or not, but she is certainly not boring.

Personally I prefer her in the "lighter" repertoire, such as Zerbinetta, though there is nothing light or comical about her 2001 Salzburg Zerbinetta (Wieler-Morabito´s production) in which Zerbinetta is a disillusioned prostitute working from Harlequin. Or about the 2003 Paris Zerbinetta, a deep-tanned tourist on a Greek island.

As evident from the video clip, Natalie Dessay was Queen of the Night in the Benno Besson Magic Flute production in Paris 2000, but unfortunately she did not perform the role on the recently released DVD of the production..

This DVD is highly recommended.

Below, a curiousity not from this Dessay DVD. Natalie Dessay´s debut as Olympia in Roman Polanski´s Hoffmann production, Paris Bastille 1991, which kick-started her career:

Agree with you (almost) completely respecting Dessay's vocal deterioration. I first heard her in Vienna in the late 90s and then at the Met in 2003. The voice was virtually unrecognizable.

That said, the 2003 Met Zerbinetta DID deliver suitably spectacular pyrotechinics but the texture of the voice left an astonishing amount to be desired.

Its interesting that her career has continued to ascend over the past decade inspite of the vocal deterioration you note.

I have to confess I was underwhelmed by her Lucia last year (have read and heard great things about Damrau who is singing it now but have unfortunately missed it being out of the country. Netrebko later this season. Hmm).

To be sure, I haven't always been as much a Dessay fan as perhaps one should be.

Also, I think it makes one appreciate Fleming whose voice (if not always her use of it) retained the full luxury of its texture through her mid 40s and is quite impressive in that respect even today - as once again confirmed by last Sunday's Capriccio. Even moreso for Mattila.

Once again re: Renée Fleming, I just watched her Arabella DVD from last year, which imo is well.. I´ll have to think about what to write about it, but it´s probably the worst thing I have seen from her on DVD.

We are going to see her Marschallin later this season though so hope you are right about her Vienna performances - with Diana Damrau, whose appeal I´ve never really understood, but perhaps it becomes evident when seeing her live. Apparently they are putting up Wernicke´s old Salzburg production for them (thought they had thrown out the sets a long time ago...)

Just to be clear, the Fleming of 2008-2009 is not to be confused with the one of 2001-2002. Still, the "voice", at its best, is very beautiful. Her Met Desdemona this February was almost certainly the best female performance I've heard in the last year (with the possible exception of Kirchschlager's Dorabella and Octavian). [Garanca as Rosina and Harteros as the Countess were exceptional as well.]

Um...put the Mattila Salome rifht up there with AK and RF.

I take it you never heard Waltraud Meier as Isolde/Ortrud/Kundry/Sieglinde then?

I was speaking only of what I've heard in the last year. I have heard Meier in all those roles and as Isolde just last summer. She was never less than enormously compelling dramatically and occasionally the voice has been very impressive as well.

Her Isolde in Munich was indeed enormously compelling but in terms of vocal beauty did not match the performances mentioned in my previous commnet.

Incidentally, her Ortrud at Covent Garden a few years ago stole the show from what was a superb cast, top to bottom. (I suppose you can guess the identity of the Heinrich.)

With Waltraud Meier I simply never make that distinction, to be honest. Though objectively I may well describe her vocal shortcomings they have always been very unimportant, imo (except as Fidelio-Leonore). Her Isolde is without doubt the singularly best female operatic performance I have ever heard. Karita Mattila´s Salome may have equalled that, had I heard it.

That said I theoretically don´t think I agree with you, though I am not in a position to say so as I´ve only heard the performances you mention on broadcasts.

On a related note, I simply do not understand why certain very talented singers continue to waste their time with parts such as King Heinrich, offering at maximum intermediate dramatic and vocal possibilities..

I agree RF was in superb voice as Desdemona (broadcast), btw, but without an Otello I simply cannot take that opera seriously. I know well what RF sounds like today, and though I don´t always appreciate her on broadcasts/DVDs I am fairly certain she will be a great Marschallin live. Even if she turns out not to be, I am fairly certain the performance will still be worth attending, as the cast AND conductor are rather splendid.