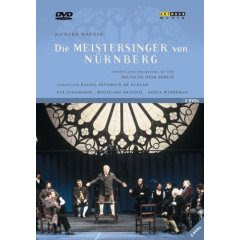 This 1995 Götz Friedrich Meistersinger production from Deutsche Oper is still on the repertoire, most recently in February 2008, where I attended a rather fine live performance in Berlin.

Why several reviewers have praised this DVD as both insightful, interesting and revelatory is beyond me. I simply find it boring, though not as much as Wolfgang Wagner´s un-dead Bayreuth productions.

The staging is simplistic with a declining toy village image of the city of Nürnberg in the backgounrd as well as some images of 1945 Nürnberg apparently serving to distance the staging from the nationalistic aspects associated with the work, allegedly Hitler´s favourite Wagner opera and performed during the 1930´s party rallies in Nürnberg. Other than that, Götz Friedrich´s ideas seemed rather sparse.

Rafael Frühbeck de Burgos is an interesting conductor, and musically many aspects work rather well. However, Meistersinger is above all a conductors opera and both James Levine and Daniel Barenboim are hard to beat on DVD, the latter in particular.

Wolfgang Brendel is a rather fine Sachs, though I´d personally prefer more sparkle as well as more (some?) chemistry with Eva Johansson´s Eva, a part she can sing, but which doesn´t seem ideal for her. Best was Gösta Winbergh as a both vocally solid and dramatically believable (though not too young) Walther. The additional cast all performed well, without stealing the show.

For those not keen on the Metropolitan Opera Schenk production, this may be worth exploring.