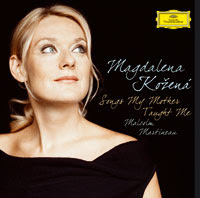 According to the promotional material this new Magdalena Kožená disc "presents a personal collection of songs she has known since childhood and that form some of her earliest musical influences...they are just the sort of songs a mother would sing to her baby".

Named after one of Dvořák´s Gypsy Song, "Songs my mother taught me", the disc features 34 relatively short songs exclusively by Czech composers, including several rarities. She is accompanied by the excellent Malcolm Martineau on piano and guitarist Michael Freimuth in Eben´s beautiful (and previously unknown to me) Lute songs. For Dvořák´s Moravian duets, Magdalena Kožená was joined by Dorothea Röschmann, a work they also performed together in Berlin earlier this year.

That Magdalena Kožená has a very beautiful and even lyrical mezzo-soprano voice is not new. Neither is her exquisite sense of characterization also heard on previous CD´s such as her Mozart recital disc or her exquisite French Arias all previously released under her solo contract with Deutsche Grammophone, as is this disc.

Here she sings songs from her native country in her native language. And perhaps this contributes to the added impression of commitment she brings to this repertoire. With more individuality in expression, she could be one of the greats.