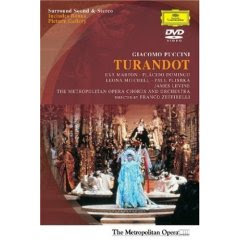 For the first two acts, the first one in particular, Franco Zeffirelli gets away with it so well, that I almost felt compelled to stop referring to him as Franco "the undead" Zeffirelli. Though, based on the tasteless final act, the term still comes in handy, though admittedly it is not very sophisticated..

What exactly makes Franco Zeffirelli deserve the label "opera director" I do not know: He designs the lavish sets and dumps authentic-costumed singers in them. A set designer in productions without a director seems more appropriate.

Needless to say, he presents a genuinely conventional Turandot. Which actually works rather well in the first two acts due to the rather fine and realistically created environment of ancient China. For the third act, the set suddenly explodes in tastelessness..

Plácido Domingo is predicably superb as Calaf, by far the best on DVD. Eva Marton gets reasonably away with Turandot, thought she would have gained much had she not been flat. Leona Mitchell´s Líu I never really warmed too, contrary to the audience.

James Levine? Superb. The structure of Puccini´s operas is something he apparently seems to have an intuitive understanding of.

In summary, not the worst of the Metropolitan Opera´s Zeffirelli productions by far. If one leaves before the third act that is, which also has the advantage of avoiding Alfano´s ending.

For a Turandot on DVD, David Pountney´s superb totalitarian nightmare will be preferred for those inclined towards a directed version of Turandot, though not for those wanting to hear/see a fine interpretation of Calaf or a memorable reading of the score.

Good lord, did we watch the same production? Domingo the best in this performance?? Medium notes very good, high c's to forget... as usual when Domingo sings the Italian repertoire (in Wagner thankfully he's always reliable and very good). Here he even cracks the main high c, as he couldn't hold on Marton's high singing (and its length) and the same crack he did 4 years before in Milano, the same production, at the some moment, with the same soprano!!! And how can you say that Eva Marton's here flat in notes?? Hello, this is not acceptable by any account. Marton high notes are not flat at all, she's in powerful shape, and Domingo is in obvious struggle in the main duets. That said, I liked his acting and he's the nicest of persons, but this edition of Turandot belongs to Eva Marton, "the" Turandot of the Turandots, not to him.