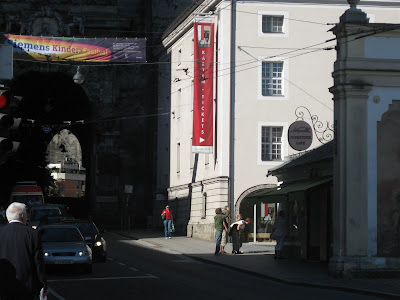 I cannot emphasize this point strongly enough: Tickets for the Salzburg Festival should be bought at the official Salzburg Ticket office/Salzburg Festival webpage and not at any of the numerous secondary outlets spread out throughout the city of Salzburg for the following reasons: The official ticket office provide both the cheapest (read: sold at the official rate) and most readily available tickets.
Contrary to the Bayreuth Festival, getting tickets for the Salzburg Festival is easy and does not require any queuing, despite what various internet-based touts will try and tell you. You just need to be cool and wait. Tickets will eventually re-appear on the Salzburg Festival website for all the sold-out performances - starting one week to one day before the performance. And even if they do not appear on the website, it pays to ask at the ticket office. They put up signs for available performances every day, but return tickets are normally also available for the performances labelled "sold-out" or not on the list at all.

However, almost all tickets are outrageously expensive in Salzburg ranging from 70-360 Euro. The 360 Euro tickets may always be had. The difficulty is to get the ~70-100 Euro seats, but this is not impossible. Curiously, several people still pay outrageous amounts such as 1000 Euros for tickets for the most popular operas via ebay, which is completely unnecessary.

Within the city of Salzburg, several ticket agents may be found, obviously adding a varying commission to the official rate - entirely legal it seems as they operate in the open. Exactly how much above the offical price they charge depends on the show – I saw a Japanese-looking gentleman with a 450 Euro ticket take an originally priced 150 Euro seat at the Riccardo Muti Brahms Requiem, while another agency “only” charged a 50 Euro commission on Otello tickets. Not to mention the 1200 Euro asked for most opera tickets on ebay..
Future Salzburg Festival-goers may be advices to check out the exact venue of their preferred performances in order to decide their ticket-buying strategy: The Grosses Festpielhaus is the major venue with the most seats and thus the highest availability of return tickets, which always appear here. The Haus für Mozart and the Felsenreitschule are the other two operatic venues and are smaller – ie. they sell out faster and returns are harder to get.
At both Felsenreitschule and Haus für Mozart a very limited number of standing tickets are available, but as they are sold together with all other tickets they have disappeared months before the Salzburg Festival. Returns may of course be available but are not worth basing a trip upon.
All my tickets for the this years Salzburg Festival (all the operas minus Romeo and Juliette plus Brahms Requiem) were such last-minute acquisitions.
Posted by mostly opera... at 14:44

Just wanted to thank you for this post. After reading it I checked the Festspiel website and was able to score a ticket for the "sold out" Cosi fan Tutte premiere. It was more than I have ever spent on a ticket, but I was glad have the chance to see it... even if it was a bit scary/disturbing being at the premiere. Way too sceney for my liking!