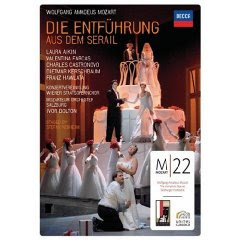 The expression hijacking of an opera has never been more true than in Stefan Herheim´s 2003 production of Entführung, filmed at the celebratory 2006 Mozart Salzburg Festival. It caused a genuine scandal at the opening in 2003 and what Stefan Herheim did to this opera, I simply did not imagine was allowed on a major stage like Salzburg. Without doubt, one of the most controversial opera productions I have seen. But also a very fine and interesting one. Mainly since Stefan Herheim has two qualities that sets him apart from most of his colleagues of the deconstructive school of opera directors: He tears down, but with a purpose as he also recreates. And, the production is very stylish. That apart, he seems to be able to clearly communicate his ideas to the audience.

The music is Mozart´s. The recitatives are new. The story is completely new. Die Entführung is completely deconstructed. There is simply no real action. Bassa Selim is written out. In modern costumes we are presented with a line-up of scenes exploring the relations between men and women, accompanied by Stefan Herheim´s newly written dialogue. And his view is bleak: From the quasi-rape scene between Blondchen and Pedrillo and the dancing around the wedding cake to paralysis and jealousy. There is absolutely no relation with the traditional Die Entführung except the music.

A brilliant idea as such - especially as I find the orginally envisioned Turkish harem-story nightmarish. However, those happening to like this Turkish nightmare may feel otherwise.

The sets are very simple mainly consisting of the interior of a house with Freudian video projections on the back stage wall.

The most radical and innovative approach to any staging I have seen since I cannot remember when. Not necessarily a good thing. But in this case, it is.

And the singers: Especially Franz Hawlata, Valentina Farcas and Charles Castronovo seemed well-suited to this concept and were vocally outstanding as well, Laura Aikin somewhat less so.

Ivor Bolton conducted an inspired performance of the Mozarteum Orchestra.