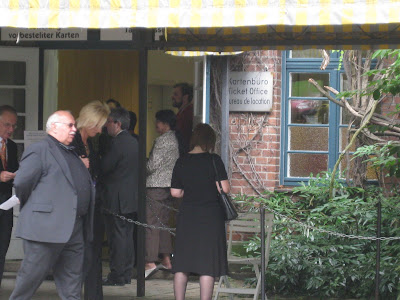 Ticket queue for Tristan in Bayreuth 2008 (right after I got my ticket)
As I sort of happened to be in the area (Salzburg, a 3 hour drive), why not try and drive up to Bayreuth to see if any last minute tickets were available for this years Bayreuth Festival? I had a half appointment there with friends (with tickets) for Tristan (August 14th) and Parsifal (August 16th) - the two performances I intended to see, having already seen both Meistersinger and The Ring there last year.

Day one - getting a ticket for Tristan:

A reader had kindly informed me by mail that one of the hotels in Bayreuth was selling tickets for Tristan, which turned out to be entirely correct, but on the morning of the performance my friends made the mistake of telling the receptionist that we did not stay at the hotel, at which point she refused to part with the tickets....

Not wanting to spend my entire holiday queuing Bayreuth Festival tickets, I decided 12 am (midday) would be an appropriate time to start queuing (the Ticket Office opens at 1.30 pm, the performances start at 4 pm). Arriving at 12.15, I was number 7 in the queue. Number 1 arrived at 9 am. When the ticket office opened at 1.30, they claimed only one ticket had been returned. Now I was number 6. Curiously, five tickets were returned during my one-hour wait in the queue, but to the office next door as the ticket office hadn´t opened yet. Exactly why these tickets did not resurface we speculated loudly about in the queue..Though, apart from the explanation offered by us (foul play on part of the organizers involving internal redistribution of the tickets), the tickets may of course have belonged to the Friends of Bayreuth (a sponsor organisation), who gets allocated numerous tickets for the Festival each year (in return for the financial support of the members, obviously). To make ticket matters more complicated, the Friends of Bayreuth have their own ticket office at the other side of the Festival House with an entirely separate ticket queue.

The same two black-market dealers were constantly cruising past the queue of about 20 people - one on a bicycle alternating with a sportscar, offering tickets for twice the official rate... During the next hour three tickets were returned by ticketholders, whose companions were ill etc. At 3 pm I was number 3 in line. An elderly gentleman from Munich then offered up his daughters ticket as she was unable to come, but as he had a Friends of Bayreuth ticket (easily recognizable as the name of the ticketholder is printed on the front), he was asked to go to the Friends of Bayreuth ticket office. Then a phone call from the Friends of Bayreuth office quite unusually offered one of their tickets up for sale, meaning that at 3.05 pm I now was number 2 in the queue..

It was now 3.15 pm and suddenly the elderly gentleman from Munich returned from the Friends of Bayreuth office having been allowed to offer his daughters ticket up for sale to the general public as nobody was waiting in the Patrons ticket line. And as the gentleman in front of me could not afford it (150 Euro) at 3.15 pm I was the owner of a ticket for this years performance of Tristan and Isolde. Not exactly cheap, but at least bought at face value. And vastly easier than returning your ticket application form for 8-10 years in a row...

Day two - getting a ticket for Parsifal:

When queuing for Tristan tickets the previous day, I had noticed that on two occasions ticketholders returned tickets for future performances which the Ticket Office then offered to the people in the queue (ie. Meistersinger next week), so at 12 am (midday) I decided to join the ticket queue for this days Meistersinger to try and look closer into the Parsifal ticket situation and, if possible, get a cheap ticket for the Meistersinger (I already saw this production last year). I was number 6 in the queue. Number one started queuing at 9 am. Five of the people in the queue were also present in yesterdays queue and the performance of Tristan, which we all attended, was discussed. And again, queuing practices here, as everywhere in Germany, are very civilized - you may easily leave the queue for 30 minutes, drive downtown etc. and then return to your position.

At least 10 people constantly circled the Festival House carrying signs "Suche karte für Parsifal" (tickets needed for Parsifal) and the (very friendly) ladies in the ticket office told us that last week, two people had slept in front of the ticket office the night before the Parsifal performance and nothing was returned at any point.

Quite the contrary with Rheingold last Friday, as the highway to Bayreuth was suffering from extended queues due to heavy holiday traffic (the Bayreuth highway is part of the major E53 trans-European highway) and ticketholders had been phoning down the ticket office trying to return their tickets, as they were stuck on the highway and could not make it.
"Every year we tell people that especially on Fridays they have to be here early as the highway is unpredictable, but do they listen? It´s always the same with Rheingold and we constantly have to remind people that there is no intermission. If they are not here on time, they simply do not make it", as the lady in the Ticket Office sighed. As a result, there were spare tickets in all categories for last weeks Rheingold and sold at vastly reduced prices as well, at the request of the ticketholders, who were stuck on the highway - 205 Euro tickets were sold for 50 Euros, as we were told...

But back to the Meistersinger queue: At 1.30 pm the Ticket Office said that nothing had been returned. The usual two black market dealers were circling the house, not offering anything up for sale, but looking for tickets for Parsifal themselves, as they allegedly had clients on hand willing to pay exorbitant prices for these.

As it was freezing I was contemplating driving back to Nürnberg, but then a young couple suddenly arrived at the Ticket Office returning two tickets for.... Saturdays Parsifal: As number 1, 3, 4 and 5 in the queue could not make it, the tickets went to number 2 (a Japanese guy, who had been scribbling constantly on a note-pad for two hours) and ....me. And a good seat as well.

Furthermore I was offered tickets for Meistersinger as well, but declined due to the price (205 Euros) as I decided to save the money for Salzburg next week. They were second row seats though, and sold at face value...Tickets were offered for next weeks Meistersinger as well as for Sunday´s Siegfried, both of which my queuing position entitled me to buy (I declined as I will be in Salzburg).

Even 15 minutes before the start of the Meistersinger performance, a gentleman came up and offered me his wife´s seat for at least the first two acts for free (she´d perhaps return for the third act), which I declined as well, since I was technically not the first in line (an elderly gentleman was) and thus I felt obliged to offer the seat to him (after all I saw the production last year and never really intended to see it this year, furthermore the third act is my favorite).

And the Parsifal queue on Saturday, in which I didn´t participate for obvious reasons: The same 5 people from previous days were in it. Three tickets in total were returned - all between 2.30 and 3.30 pm...

In summary: As last year, tickets may be had for the Bayreuth Festival quite legally putting in a minimum of queuing time. Furthermore, the ticket queue is a highly entertaining place, at least for a couple of hours. 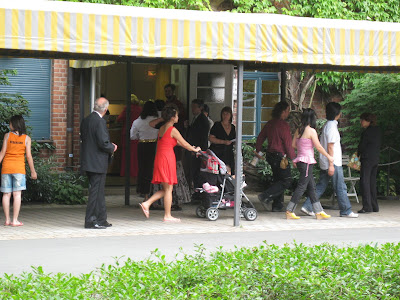 Congratulations! And thank you for such a detailed and useful information.

Thank you for this detailed report. I may try it myself next year!

Yeay! Great report! Wish I can make it to the Green Hill some time soon! (and sorry for the Faust incident that almost turned into an accident...)