Willy Decker´s Don Carlo on DVD: Death awaits us all... 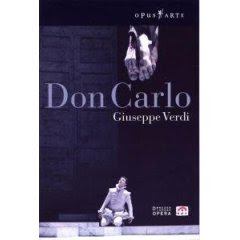 Don Carlo (Italian 4-act). Amsterdam Opera 2004. Production: Willy Decker. Cast: Rolando Villazón (Carlo), Robert Lloyd (Filippo), Amanda Roocroft (Elisabetta), Violeta Urmana (Eboli), Dwayne Croft (Posa), Jaakko Ryhänen (Inquisitor). Conductor: Riccardo Chailly with the Concertgebouw Orchestra. Further information here.
Willy Decker´s Don Carlo is genuinely a depressing acquaintance. It is set in a grey marble mausoleum, which in fact is a model of the Pantheon de los Reyes at the monastery of Escorial, build by the historical Filippo II and containing the bodies of almost all Spanish Kings since Carlos I as well as Filippo himself, who also died here immediately upon it´s completion. The only departure from this depressing backdrop was the star-covered sky replacing the mausoleum for the Garden scene. Death is towering in this production.

Willy Decker rightly sees Filippo as the central character of the opera and in the accompanying leaflet he describes him as a failed human being, obsessed by death, unable to give or receive love, failing to live up to his own father´s expectations and similarly crushing his own son. Apparently the historical Filippo collected corpses and created a collection of the bones of his royal relatives at the Pantheon at Escorial.

Did I mention that all the characters wear austere period costumes in puritanical shades of grey as well?

Agreed, Don Carlo is a serious drama. One could obviously argue that Willy Decker succeeds in transmitting the depression of Don Carlo and his confined environment to the audience. Rather too successfully, I´d say.
Decker´s usual tendency towards manifest symbolism is here: The giant hand dropping down from above, the huge cross. But where is his usual keen sense of characterization? Admittedly, he does not have the best singing-actors to his disposition, Rolando Villazón apart.

Rolando Villazón is a wonderful actor - however he does seem to act the same way, no matter what part he sings. Whether it´s Alfredo, des Grieux, Romeo or Don Carlos, they are all slightly neurotic in a hyperactive, submaniacal adolescent way complete with fits of physical overacting. Though less fitting for Don Carlo than for the others, Rolando Villazón still brings a wonderful expressivity to the part, making his performance the highlight of this production. Though he, as well as most of the others, look ridiculous in the austere period outfit. And here we clearly hear exactly how his voice cheats the listener with the dark sound, falsely leading us (and himself) to believe him on the way to the dramatic repertoire.

Robert Lloyd is not an uninteresting actor, although I find his stage manners rather irritating and if Filippo was a speaking part he would have done relatively well. Need I say that Filippo is both the vocal and dramatic the cornerstone of the opera?

Violeta Urmana is no femme fatale and though she may have the notes her Eboli is genuinely uninteresting. Same for Amanda Roocroft, who has the added problem of struggling vocally. Dwayne Croft was a decent, though anonymous Posa.

A Don Carlo production may work fine without a Don Carlo. But Don Carlo does not work when he is the only character that work reasonably well. Even if Chailly with the Concertgebouw Orchestra are more than fine.

Italian Don Carlo is not well served on DVD. That I do not care for the Metropolitan traditional production that is older than I remember, may surprise no one (truth is, with last seasons cast I would have cared for some of it).

In this DVD NO Bododina. It is Violetta Urmana.
So you just incidentally gave bad review to Borodina, but she even NEVER WAS in thsi production.

Ouch. You are right. Sorry for the confusion. However, I do feel the same about Olga Borodina´s Eboli as I do about Violeta Urmana´s...