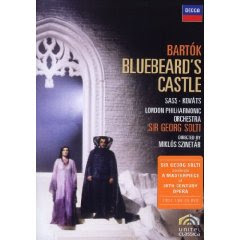 For those not familiar with this work: Duke Bluebeard´s Castle is not the difficult Bartok one may assume if only familiar with his later works, but rather composed at a time, where he was very much under the influence of the late romantic composers such as Richard Wagner.

Duke Bluebeard´s Castle, in brief, is the psychological drama of Duke Bluebeard who brings his new wife Judit back to his castle, where seven doors open into a hallway. Judit demands that they be opened, despite the protests by Bluebeard and they contain such things as jewels, armours, vast land shapes - all covered with blood, however. Behind the Seventh Door the three former undead? wives of Duke Bluebeard appear, whom Judit must now follow.

The libretto is based on the medieval Bluebeard folk tale as well as influenced by Freudian psychoanalysis. This is not a live operatic performance, but rather a film, where we see the opening of the seven doors in a relatively straight-forward manner and the singers lip-synchronize to a prerecorded sound- track.

First and foremost: This is Sir Georg Solti´s show. He extracts both the mysterious and eerie from the score in a dense and entirely overwhelming performance of great beauty. Just listen to the spine-tingling sound of water in the sea of tears. And very importantly: Never, never is he sentimental.

Sylvia Sass is a wonderfully expressive Judit, as opposed to Kolos Kováts rather dry and stone-faced Bluebeard.

This film is more than 25 years old, and it obviously shows. Thus, many today may find it rather dusty and static. However, one may almost be willing to overlook these weaknesses in favor of the absolutely magnificent performance from Sir Georg Solti.

The opening of door 7: