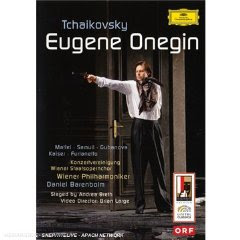 Just as it seemed the Metropolitan Opera had released the ultimate Eugene Onegin DVD earlier this year, it is seriously challanged by the release of Andrea Breth´s production from last years Salzburg Festival conducted by Daniel Barenboim.

The enourmous stage of the Grosse Festspielhaus in Salzburg is utilized to the maximum with a revolving circular stage and in fact, I find Andrea Breth´s glittering-dark staging near-ideal.

Updated to the middle of this century, Eugene Onegin is set on an estate in an unspecified location with more than an added touch of psychoanalysis. The opening is bizarre: Male workers submissively queue up to have their heads shaved by Madame Larina on the estate. This pattern continues: In Andrea Breth´s Eugene Onegin, the women are in charge: Olga is the one taking the initiatives with Lenski and surely she won’t suffer long after his death. And though Onegin initially rejects Tatiana, he is clearly the weaker character of the two. A playboy at heart, he is pushed around and she is right to finally reject him as he is bad news. Even the old nurse Filipevna pops up eerily in the corner from time to time. The changing images of woods and interiors made possible by the circular stage are simply superb and futhermore Andrea Breth´s individual characterizations are excellent.

Anna Samuil has a very distinct and immediately recognizable clear soprano and though she may occasionally seem slightly limited in expression, both vocally and dramatically, as this Tatiana she is very convincing, not least in the letter scene.

Peter Mattei is the modern Onegin, in splendid voice and fittingly cool acting. Ekaterina Gubanova is a rich-voiced Olga compared to whom Joseph Kaiser is more anonymous, but nevertheless more than adequate Lenski. Ferruccio Furlanetto convincingly delivers his one aria.

Daniel Barenboim with the Vienna Philharmonics is even better than Gergiev at the MET, in a far more subtle, yet sumptuous reading. But make no mistake: Daniel Barenboim is fully capable of pulling all the stops when required as well. Though he doesn´t quite reach the expected intensity in his rather slow approach to the final scene.

How anyone can laud this dreary production full of anachronisms is beyond me, as a lover of this opera. Tatiana commands her old nurse to bring her paper, pen and table to write her letter, then proceeds to bang it out on a typewriter sitting on the floor.
Inexplicably there is water all over the floor in the interior scenes. The duel takes place in the abandoned family home, Tatiana wanders around in her slip (perhaps a modern nightdress a la Victoria's Secret) in the final scene, etc ad nauseam. I for one wouldn't willingly pay for a ticket to see such a mess anywhere, and certainly not at Salzburg prices

It's a shame to see how a rather uninspired staging forces the singers to be true through their acting to the director's options and overall view of the opera. But then again, thank God it's the only thing the directors can (usually) mess with. To listen to Peter Mattei's wonderful Onegin (and, actually, to all of his roles) I would readily suffer terrible directing, and even rather poor cast members. As a matter of fact, the only reason why I still listen to La Scala's Don Giovanni is because Peter Mattei makes it worth it (apart from Don G and Leporello I was utterly disappointed by the entire cast of the production).
Peter Mattei is definitely one of the very best (if not the best) lyric baritones of our time, not to mention that he is also such an amazingly good actor. It's a shame therefore to see how poor staging or cast choices may compromise what should become timeless recordings.