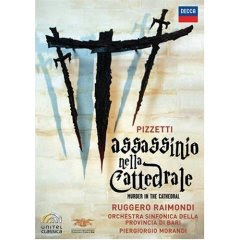 Ildebrando Pizzetti (1880-1968) was a composer writing in largely parlando style mixing influences from contemporaries such as Hindemith with renaissance composers and Debussy. As a relatively conservative composer, most will find the music easy to listen to.

The world-premiere took place in 1958 at La Scala with Nicola Rossi-Lemeni as Becket and Herbert von Karajan subsequently conducted a production at the Vienna State Opera featuring Hans Hotter as Thomas Becket (a live recording from 1960 is available). Since then, the work has remained rather obscure. In May 2009 a new production by Yannis Kokkos will be staged at La Scala featuring Ferruccio Furlanetto as Thomas Becket.

This DVD presents a staged performance in the spectacular Basilica di San Nicola in Bari and is the only DVD version available of this work. Filmed with the large orchestra placed between the audience and the singers, who are at the altar, this production may only come fully to it´s right on DVD. The setting is superb and the Bari Cathedral San Nicola Basilica creates what I believe to be the optimal atmosphere for this clerical drama. Spiced up with film footage of off-stage action, such as Thomas Becket sitting in his clerical chamber as well as outside clips of horses etc.

Musically, Ruggero Raimondi is in superb voice and his presence, as always, is magnetic.

As a DVD, this performance will be hard to beat. No wonder Decca has decided to release this.

Morandi and the orchestra: 3-4

You make a small confusion between St Nicola de Bari and Bari cathedral. It is two different buildings. At ten minutes walking distance from each other. I don't think my point is very relevant...
Anyway this DVD is really splendid.

Who´d think a small city like that has so many churches anyway???
Thanks for pointing it out though.