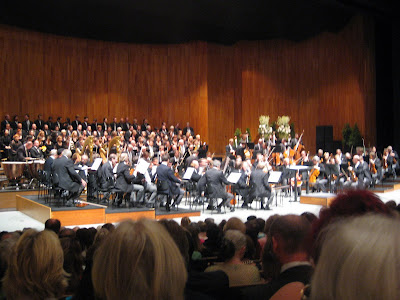 The Vienna Philharmonics during Monday´s concert. No applause photos for obvious reasons.
First of all: I despise sentimentalism. Which is exactly how I interpret the voice over the loudspeaker requesting the audience in both German and English to refrain from applause after this Riccardo Muti-conducted Brahms´ Requiem. Apparently on the request of Riccardo Muti and the Vienna Philharmonics to honour Herbert von Karajan. How exactly refraining from applause honours Herbert von Karajan is not entirely obvious to me, since the envisioned silence was replaced by everyone rushing for the entrance the exact minute the performance ended. As the distinguished elderly Viennese gentleman on my left side whispered: Salzburger sentimentalism at it´s worst.

What would have constituted a fitting tribute to Herbert von Karajan, in my opinion, could have been Riccardo Muti discussing briefly how he is influenced by Karajan, preferably with references to his reading of the Brahms Requiem, a cornerstone of Karajan´s output. Since this was not at all obvious from the way Riccardo Muti conducted this performance at the packed Grosses Festspielhaus in Salzburg, despite the slightly antisocial hour of 11 am with the sun baking outside.

Riccardo Muti seems to have three operatives in Brahms – forte, fortissimo and piano. First of all, he really does pull out all the stops and you are blown back in your seats by this Brahms. Which is not bad at all, as restraint comes close to sentimentalism at the top of my negative list. And Riccardo Muti surely has neither.

However, qualities such as building a tension line, attentiveness to detail, interchanging dynamics of the various instrument groups do not seem to range high on Muti´s operative list. But they are essential in a great as opposed to a fine interpreter of Brahms: We are light-years from the searing poignancy of a Klemperer. Luckily we are also light-years from the sentimental period Brahms light of several unnamed contemporary colleagues. Ultimately, however, Riccardo Muti´s Brahms does not strike me as revelatory. And if he indeed is the world´s foremost conductor, as his rather large fan-club here in Salzburg seems to believe, you may well have expected it to be, at least to a certain extent. But it was highly entertaining. Though I wonder if it may not ultimately seem superficial with repeated listening.

Genia Kühmeier and Peter Mattei were both superb. I cannot imagine the crystal-clear unsentimental and stylish performance of Genia Kühmeier to be bettered. Furthermore she looked great in a shimmering blue dress. Peter Mattei´s true baritone lies slightly too high for my taste in this part, which is hardly his fault, and his performance was first-rate.

I may well open a can of worms here, but does Riccardo Muti have the qualities of an orchestra-builder? I am not implying anything as I haven´t followed him closely enough in his entire repertoire to adequately estimate his strenghts and weaknesses. However, I wonder how the major Chicago-based newspaper reviewer next to me at the ticket counter will respond to this question. Obviously not a question to be answered based on one performance only. And Brahms may not be Riccardo Muti´s home turf.
But then if Otello isn´t, what is? Upcoming Riccardo Muti in Salzburg: Otello on Thursday and Zauberflöte on Friday.

I may well open a can of worms here, but does Riccardo Muti have the qualities of an orchestra-builder?

In a manner of speaking, yes. He builds every orchestra he's given the opportunity to build into an oversized but precise Italian opera pit band (his 11-year tenure as music director of the Philadelphia Orchestra almost destroyed that ensemble's signature sound which was saved only by his leaving and being replaced by Sawallisch). He can't help himself. He has no feeling for or real understanding of any music other than 18th- and 19th-century Italian opera although his bloodless passion for precision (you should pardon the alliteration) might suit him well for some of the 20th-century's atonal rep. But that last is a guess on my part.

One of the biggest mistery on the earth is....How can an orchestra so GOOD as the WIENER work constantly with a dirigent so BAD as MUTI?
Also Gergiev is always playng with the Wiener.
I don´t know why but I have in mind these words: money, money, money, money, business, vip vacation, luxus hotel, richest music lobby,... this is Salzburg.