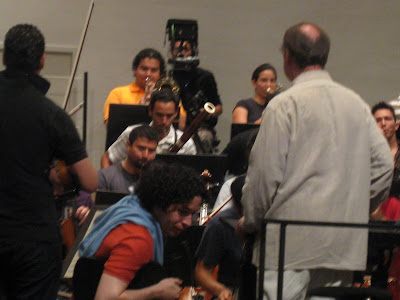 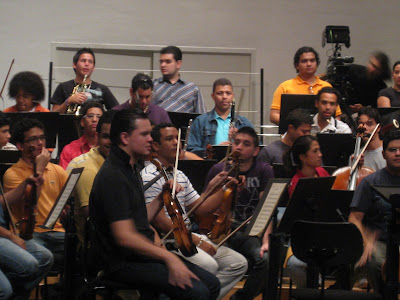 Glossy brochures and exhibitions as well as champagne receptions, coupled with hysterical and entirely uncritical applause is what met this orchestra in residence the Salzburg Festival.

Having traveled extensively in South America including Venezuela, I have learned that things are rarely what they appear on the surface and I am honestly appalled at the apparent lack of critical journalism relating to the coverage of this orchestra.
Unless, of course, the ravishing praise is indeed a result of in-depth, independent research done in Venezuela by journalists chosing not to mention this fact in their articles..
I will reserve my unconditional praise for the musical-educational system of Venezuela until after I´ve read such reports meeting minimum standards of critical journalism.

Musically, however, I have only positive things to say about the Símon Bolívar Youth Orchestra. Especially since the orchestra had skipped the self-promotional Venezuelan national flags and costumes for this television-recorded semi-rehearsal with Nikolaus Harnoncourt at the University Aula in Salzburg.

The enthusiasm of the players is contageous. Opposed to the increasingly professionalism of the West-Eastern Divan Orchestra, the Símon Bolívar Youth Orchestra is clearly still a youth orchestra complete with numerous wrong notes, false entries and unnuanced playing. But the sheer enthusiasm seems virtually unbeatable.

A 2-hour rehearsal of Beethoven´s 5th symphony with Nikolaus Harnoncourt was on the programme. Gustavo Dudamel sat next to Harnoncourt translating his English instructions to Spanish for the orchestra members. The overall title of these sessions are (translated) "School of listening" and we basically heard Harnoncourt repeatedly rehearse relatively few phrases demonstrating what difference rather simple suggestions may do to the audience perception of the work.

By the way - since Harnoncourt apparently is in town, may I suggest he walk 100 meter, cross the road and conduct Claus Guth´s new production of Don Giovanni at the Haus für Mozart?