Claus Guth with controversial Don Giovanni in Salzburg: A masterpiece despite mediocre playing from the Vienna Philharmonics 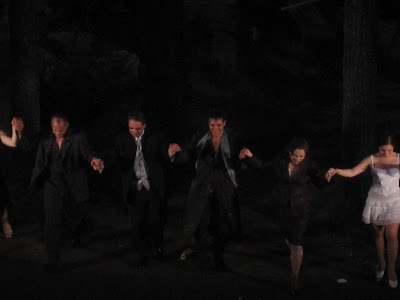 Claus Guth´s new Salzburg Don Giovanni has divided audiences and critics like few other recent productions, with responses ranging from "disgraceful" and "disastrous" to "masterpiece" and "the work of a genius".

And let me provide the final answer: Claus Guth has indeed created a masterpiece. Without doubt the best staging of Don Giovanni I have yet seen, whether live or on DVD. Though almost ruined by the staggering mediocrity of the Vienna Philharmonics. Are you really allowed to play Mozart like this in Salzburg? Not entirely, it seemed, based on the heavy booing of Bertrand de Billy.

For those familiar with previous Claus Guth productions such as Nozze di Figaro and Ariadne on Naxos, his dark view of Don Giovanni should come as no surprise. As I´ve reported previously from the August 27 premiere (with plenty photos) , the entire action takes place in a rotating (the stage is circular) wood at night.

The setting is eerily surrealistic and includes sudden appearances of ropes, a bus-stop and a car. Don Giovanni is mortally wounded in the fight with the commendatore and the opera takes place during the last three hours of his life as he is slowly dying. Or perhaps it is just drug-induced hallucinations of him and Leporello, both intravenous drug users, in the wood?

Don Giovanni is a creation of the desires of all three women (Zerlina, Donna Anna and Donna Elvira) and is as such rather passive (after all he is dying). In the end Donna Anna kills herself, as she cannot have him. Which is possible as the Vienna version (without the final scene) is played together with the rarely heard duet between Zerlina and Leporello in Act 2.

Once again Claus Guth demonstrates his excellent grasp on the individual direction of the singers, who furthermore were all excellent actors. Light and bubbly Mozart is not for him, but his psychological insight is immense. Furthermore, it was constantly entertaining throughout. Not the least due to Erwin Schrott´s Leporello.

Erwin Schrott is simply superb as the selfabsorbed, hallucinated Leporello. Everything revolves around him. He is a fabulous physical comedian – once of the best I´ve seen on stage. His Leporello was anything but ordinary and he was the undisputed star of the evening. I have never been particularly impressed by his looks, but..he does look gorgeous here. Even the ever-serious Claus Guth makes him take of his shirt in the obviously very hot pine wood around midnight, a decision you don´t even want to question..
Erwin Schrott´s appeal is unseparable from his physical presence and acting. Though his rugged and dark voice is not without appeal, it is rather uneven, he is not always on pitch, there is much sprech-gesang and he doesn´t really seem to have genuine feeling for Mozart-style. However, when he acts like this, I am inclined not to care...

The always stylish Dorothea Röschmann was probably the best singer of the evening though she seemed maximally challenged as Donna Elvira, together with the excellent Pavel Breslik, who managed to infuse some life into Don Ottavio. Ekaterina Siurina was a fine Zerlina as well. Christopher Maltman´s Don Giovanni relied heavily on sprech-gesang and his voice seemed rather dry - after all he is a dying man, although I am not convinced these were interpretative choices on his part. But he is a convincing actor.

As Festival Intendant Jürgen Flimm said when he announced Annette Dasch´s indisposition as Donna Anna, it is not easy for a newcomer to find her way in the rotating dark woods and indeed Svetlana Doneva did a fine job stepping into this very complicated production, though her voice was not particulary memorable.

Don Giovanni conducted like this reminds me why it took me more than 25 years to realize that this is indeed a masterpiece. Though I am firmly rooted in the interpretative camp of the likes of Furtwängler and Barenboim, I´d be more than willing to accept alternative readings. However, Bertrand de Billy´s apparent lack of interpretative ideas was astonishing. Instead the Vienna Philharmonics sounded embarassingly square and uninspired. Worst of all in the final scene and in the recitatives, that seemed to drag on endlessly. Staggering mediocrity, indeed. The only positive thing is that at least he didn´t apply Mozart light period style, which they luckily do not seem to favour here in Salzburg.

Massive applause to the entire team minus Bertrand de Billy, most of all for Erwin Schrott.

Easiest solution: Change the conductor to one of the at least 10 able to pull of a vastly more interesting performance and a genuine masterpiece may emerge. Unfortunately it looks like a DVD will be released of this years production.

Next years Salzburg Festival will see the completion of Claus Guth´s da Ponte trilogy with Cosí fan tutte (it started out with Nozze di Figaro in 2006). 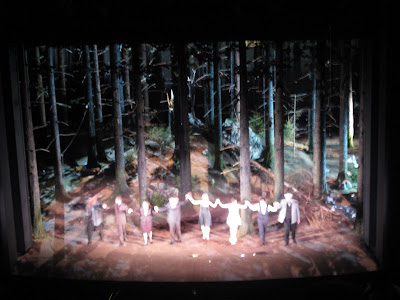 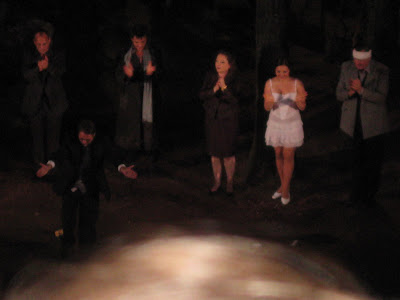 Lucky you! On the 16th, while Svetlana Doneva sang on the rigth corner of the stage (dressed in black and with the score), Eva-Maria Höckmayr (Claus Guth's assistant) acted as Donna Anna.

May be I was distracted (most of time I was looking to the 'real' Donna Anna), but I don't recall Donna Anna killing herself. How did it happen?

Well, of course I may be wrong, but after her last aria she rushed into the middle of the wood after she grabbbed a gun and later when the wood turned around I thought I saw her lying there in some blood.

Wouldn´t be the first time if I was wrong, though, but it fits very well with Claus Guth´s normal way of staging these things..

As I'd commented earlier I hated the production but agree compleely with your predictably excellent analysis of the musical aspects, notably the excellence of Schrott (who is, IMO, much better as Leporello than the Don - more on that elsewhere) except that I was not quite as enthused about Siurina whom I'd heard in better form elsewhere.

My comment to the ealier post focused on the production but it is really the low musical standards which I alluded to only in passing that were most disappointing. DeBilly's lack of a concept and the generally poor excution of the VPO were particularly offensive. I'm no fan of Hanancourt but he knows what he wants to do and the orchestra plays well exceptionally well for him.

The casting was also far bellow what one could hope to expect at Salzburg and top to bottom much weaker than the various combinations in the Kusej staging (seen multiple times in the three years it was shown and the Ranconi before that).

Just saw the 2008 Salzburg Festival production (Pollenzani as Don Ottavio) at Opera in Cinema, 9 Jan. 2011. Hated the production, loved the singing. Yes, I also thought Donna Elivra the best sung among the women.

Just saw D Giovanni at the 2008 Salzburg Festival production at Opera in Cinema,18/7/13. Hated the production, it was a real joke! Amazing something like that could be allowed in a serious Festival. Specially the last scene on the woods, with D Giovanni eating from a sardine tin with a Burger King crown on his head... I just could not believe it!
Good singing from Dña Elvira and Leporello.

This was brilliant--the interpretation (Guth's), and the performance, of ALL the singers.