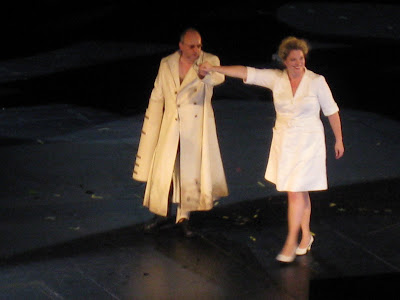 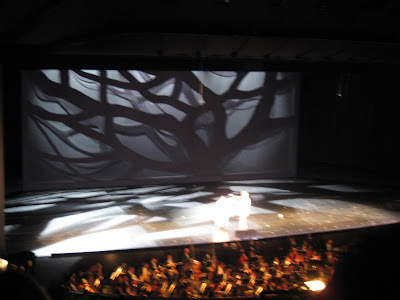 Duke Bluebeard´s Castle. Grosses Festspielhaus, Salzburg Festival. August 18th, 2008. Director: Johan Simons. Cast: Falk Struckmann (Bluebeard), Michelle DeYoung (Judit). Conductor: Peter Eötvös with the Vienna Philharmonics.
If I had bought the programme notes or even taken a closer look at the posters outside the Grosses Festspielhaus in Salzburg, it wouldn´t have come as a complete surprise that this evenings performance labelled “Duke Bluebeard´s Castle” started with Bartok´s “Vier orchesterstücken" played out in front of an undulating blue stage carpet.
Whereafter a man entered the stage and read aloud the medieval legend of the nine magic sheperds in which a father creates nine sons, who subsequently chose to live in the forest despite his plees for them to return to him. The orchestra platform is then lowered to become the usual pit and the “Cantata profana - die neun Zauberhirsche" (tr: The nine magic sheperds) was performed in a staged, colourful dream-landshape.
Apart from their common origin in medieval folk tales, the denominator of this piece and Duke Bluebeard´s Castle seemed to related to origins: Where do we come from and where are we going? Honestly, I thought this prolongation of the performance served mainly as an excuse to schedule an intermission as not to loose the drinks sale revenue, but even with this extension there was no intermission…

Now to the so-called staged version of Duke Bluebeard´s Castle. Which consisted of 1) A completely empty black stage with the silhouette of a black tree in the background, 2) Judit as a nurse carrying the severely burned as well as blind Bluebeard around in a wheelchair and 3) the only stage requisites being three green dresses, apparently symbolizing Bluebeard´s three former wifes. As the seventh door is opened, Bluebeard dies.

Afterwards I read that director Johan Simons sees Bluebeard as a weary man returning home wounded after a war with blood on his hands, the folk tale as a history of male conquest and as a sort of Beckett-inspired Endgame. Reading about this psychological approach was rather interesting, but as a theater performance it was immensely boring, the main reason being that Johan Simon´s didn´t seem to be able to adequately communicate these ideas to the audience. Needing to search extensively on the internet to understand the point of a staging always strikes me as rather irritating. I do wonder how many of the German opera reviewers reporting on the obvious similarities of Johan Simon´s staging to Samuel Beckett did get this information from attending the performance rather than from reading the press material..

The folk tale of Duke Bluebeard´s Castle with it´s heavy psychological implications more than invites an alternative directorial approach – one would hardly expect a medieval castle with seven doors on stage today, however one wheelchair on an empty, black stage does not make enticing theater in my book, no matter how intellectual the presumptions.

We are not much helped by the protagonists either:
Falk Struckmann, who plays his usual self, whether this happens to be Telramund, Iago, The Dutchman or as here: Bluebeard, has a voice increasingly resembling a character barytone, though still rather effective. Michelle DeYoung is Judit, dramatically believable as the rather irritating nurse, but with a voice I´ve never really taken to, though by no means inadequate.

Peter Eötvös clearly knows and understands this music and conducted a transparent yet forceful performance, especially of the orchestral pieces and the Canatata. In Bluebeard´s Castle, I´d personally have preferred a more late-romantic and dense approach despite the obvious qualities presented by Peter Eötvös. 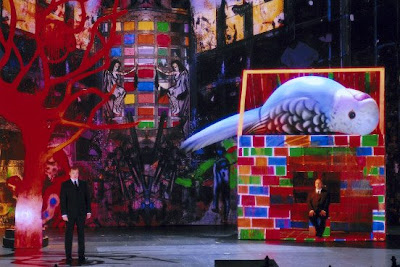 The staging for the Cantata profana 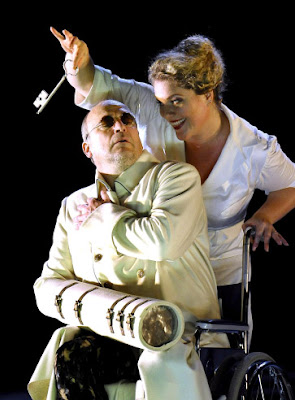 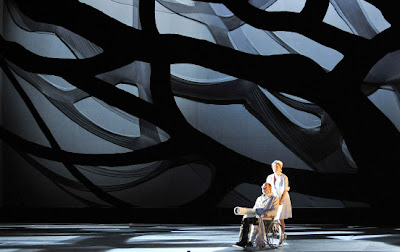