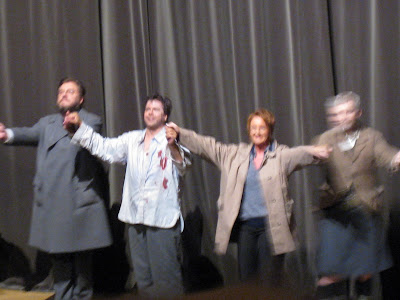 In this revival of his 2005 Bayreuth Festival production, Swiss director Christoph Marthaler depicts Tristan and Isolde as his trademark: Ordinary human beings in a desolate minimalistic setting, this time in all shades of brown, typical of the former German Democratic Republic (GDR), where brown coal fittingly served as a primary energy source..

All emotions are absent and the protagonists fail to communicate on all levels. While Isolde, a rather simple-minded child, is more interested in the flickering light-bulbs on the ceiling than in both Marke or Tristan, Marke reacts to the treachery by simply re-buttoning Isolde´s jacket. Emotional paralysis seems the keyword. As well as the boring despair and ugliness of ordinary human living conditions.

Do we really need to go to Bayreuth to see this? Do we need to go anywhere to see this? While Marthaler´s concept may sound enticing on paper, in fact it makes for staggeringly boring theater. There is nothing revelatory about Christoph Marthaler´s production of Tristan, which most of all illustrates how an imaginary concert performance may have looked in an elementary school in Leipzig in the 70´s.

Small wonder Christoph Marthaler apparently has moved on to more important things as this revival was directed by an assistant. In brief: The production looks like genuine communist trash ripe for recycling. Perhaps one of Marthaler´s points, after all. But a small consolation for those waiting 8-10 years for a ticket.
Wolfgang Wagner was previously criticized for ignoring the fraction of deconstructionist directors such as Marthaler at the Bayreuth Festival. Now he is criticized for allowing this production to continue. Nobody ever said his job was easy. Furthermore, Hans Neuenfels (of a similar vein) is scheduled to direct the new Lohengrin in 2010. I´d say this directorial approach is more than adequately covered, then.

Musically, however, the production was rather successful. First of all Irene Théorin, after being partially indisposed at the premiere, was simply wonderful as Isolde. With a beautifully rounded middle register she throws out the high Cs effortlessly and though generally sharp in her upper register (Waltraud Meier is as well), her intonation only faltered towards the end, where she was visibly tired. As a member of the ensemble of the Royal Danish Opera, Irene Théorin´s development over the past few years has been fascinating to watch. Apparently her substantial weight loss after her 2006 Copenhagen DVD Brünnhilde has been accompanied by a newfound confidence on stage. At any rate, I have not previously seen such committed and detailed acting on her part. In summary, a major success confirming her position as one of the main interpreters of Isolde on stage today.
Robert Dean Smith´s lyrical Tristan shines effortlessly, no doubt helped by the exceptional acoustics, and his rather un-committed acting fits rather strangely into Marthaler´s concept. An excellent Kurwenal from Jukka Rasilainen was accompanied by Robert Holl´s fine King Marke (sounding vastly better in the theater than on the broadcast) and a rather shrill Brangäne from Michelle Breedt. Peter Schneider was as reliable as ever without being overly imaginative in the pit.

For some obscure reason, this production will be revived next year as well where it has been chosen to open the 2009 Bayreuth Festival (there will be no new productions next year).

A new Tristan for Bayreuth? Yes, but not until 2015 and directed by Katharina Wagner
(Christian Thielemann conducts)... I suppose after a couple of large Weissbier this production in the meantime may turn out rather fine. Something I unfortunately could not try out as I had a 80 km drive to Nürnberg to look forward to after the performance…

Rarely has a production received so uniformly negative reviews as this one. For once, I agree. A selection of reviews and photographs is posted here. 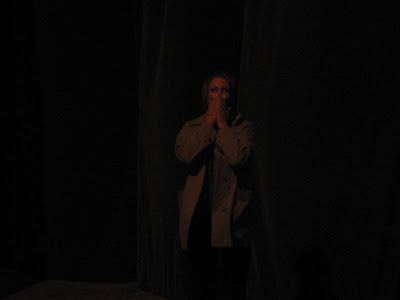 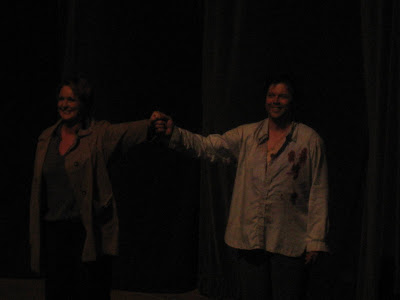 I agree completely. When the curtain opened for Act III with Tristan on the hospital bed, half of my row could barely contain their laughter. And as I counted Kurnewal lapping the bed about 20 times in the Tristan's Act III monologue, I found it hard to believe that this was actually allowed in Wagner's theater.

If someone wants to experience something new with Wagner, has to attend the Ring directed by Fura Dels Baus, not the ridicoulos stages in Bayreuth.
Don´t miss the possibility to go to Florence in November 2008 for Siegfired.....
Bye
Marc

Yes, I´d love to go for one of the Fura del Baus Ring Cycles next season if at all possible.