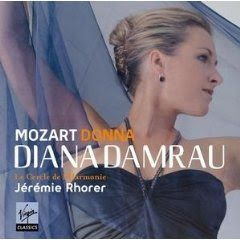 German soprano Diana Damrau (born 1971) has specialized in coloratura parts. As she hits the notes on picth, with impeccably technique and (contrary to most competitors within this field) also has some weight in her middle voice, she is currently embarking on a major career.
Admittedly being able to negotiate the coloratura counts for a lot, especially when singing coloratura parts, which Diana Damrau also demonstrates on this CD. In "Marter aller arten" from the Abduction from Seraillet. The rest of this Mozart disc is, for the major parts, not particularly coloratura-dependent and this is why it never rises above the ordinary.

First of all, Diana Damrau´s timbre is on the dry side with relatively few colours. Secondly, I find her interpretations mannered and distinctly un-charming. As well as short of style. Especially needed in such parts as Pamina (Ach, ich fühl´s) and the Figaro-Countess (Dove sono), but also as Susanna (Deh, vieni). And both Donna Anna (Non mi dir) and especially Donna Elvira (Mi tradi) simply need more punch. And individuality, which I generally find Diana Damrau lacks as a singer, though doubtless plenty will disagree with me.

In short, I do not find that Diana Damrau rises above the ordinary on this disc and much more satisfying Mozart singing by contemporary artists as well, is available in this repertoire (such as Dorothea Röschmann, Miah Persson, Genia Kühmeier, Annette Dasch, Anja Harteros etc.). Though, I predict that admirers of Diana Damrau´s style and timbre may not be disappointed with this release.

She's definitely more interesting in live performances. The recital she gave last January in Lyon was inspired, contrary to the flatness of this recording.

Her magnetism comes from her stage presence - and obviously doesn't come through in studio recordings.

This "Nom mi dir" is certainly boring (in spite of an orchestra more interesting than the average in this sort of recitals).

Yet, her Queen of Night in the Covent Garden DVD (you know which one I mean, the Colin Davis one)is one of the most astounding renditions of the part I've ever seen/heard...

So, maybe Ms Damrau is a bête de scène, someone who attains her utmost quality only when she is on stage...

This review is written so far below the standard normal on the blog that I really do wonder whether "Mostly Opera" was either unwell or tired out or something else when she wrote this. Maybe she has taken to using ghost writers? Get well soon, and all the best!