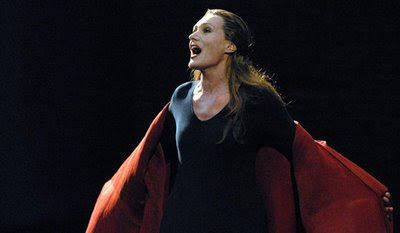 After language studies in Würzburg, Waltraud Meier was engaged at the Würzburg Opera in 1976. After engagements with various German opera houses, Waltraud Meier´s big breakthtrough came after she, on her own initiative, phoned up the Bayreuth Festival, asked for an audition and subsequently was hired as Kundry in 1983, 27 years old at the time. Becoming virtually famous overnight, her career took off from there and since then she has appeared in all the major opera houses.
Waltraud Meier considers Bayreuth her artistical home and was a cornerstone presence between 1983-2000, as Kundry 1983-93 (released on CD), Isolde 1993-99 (released on DVD), Sieglinde (2000), Waltraute in the Barenboim/Kupfer Ring (released on DVD) as well as Brangaene (1985). In 2000 she left the Festival after a conflict with the Festival Management.
The companies, with which she has the closest associations are the Berlin State Opera and Bavarian State Opera, where she has performed her entire Wagnerian repertoire. Past seasons have seen several appearances at the Paris Bastille Opera (Isolde, Kundry and Ortrud) as well as the Metropolitan Opera (Kundry, Santuzza, Sieglinde, Marie, Waltraute, Isolde).

At the Metropolitan Opera, she made her debut as Fricka 1987 when the Schenk/Levine Ring was new, and has subsequently returned as Kundry, Carmen, Venus, Santuzza, Fidelio, Isolde (one performance only), Sieglinde, Marie and Waltraute.
Her closest artistical collaboration is with Daniel Barenboim for more than 20 years, resulting in countless performances and recordings of, amongst other things, her entire Wagnerian repertoire. Waltraud Meier:

"It frustrates me that pitch is half a tone higher than it was in Wagner's time. If it was that bit lower, I could sing Brünnhilde, as well as Strauss's Salome and Verdi's Lady Macbeth. But today they lie just too high for me - I could not get them into my throat."

"Kundry is bottomless, and is still after more than twenty years a source of inspiration and will probably always remain so."

Emphasizing concert and lieder singing, Waltraud Meier devoted the 2003-4 season to lieder.
Vocally, Waltraud Meier is a mezzo-soprano with a flexibility towards the top allowing her for (limited however) ventures into the soprano repertoire, most notably with Isolde, but also with Fidelio-Leonore, while other of her cornerstone parts such as Sieglinde, Wozzeck-Marie and Ortrud may be considered zwischen-fach.

Waltraud Meier´s floating expressivity comes fully to its right in Wagner, where, on good nights, her voice cuts through the orchestra like a razor-blade and the high Cs are effortless thrown out. She has a tendency to be sharp in the high register, which on off-nights may result in a not negligeable amount of off-pitch singing as well as considerable difficulty with the topnotes.

However, Waltraud Meier is a formidable presence on stage with entirely compelling acting skills and maximal expressivity, vocally as well as dramatically. None of her recordings come even close to capture the electricity she generates in live performances.
Waltraud Meier´s most important parts are Kundry, Isolde, Ortrud and Sieglinde, where she is virtually unequalled as a singer-actress.

"The most important thing for me is: What happens on the stage must have something to do with the piece! Directorial liberty is too often misunderstood! You consider the audience to be fools if you think a problem may only be understood if it takes place in a present-time setting.. Of course I am not advocating old-fashioned productions... Directors like Ponnelle, Friedrich, Bondy or Chéreau are the true masters as I see it. I feel that several directors - especially in spoken theater - abuse the pieces for their own vanities sake, rather than have the courage to write a piece of their own."

Waltraud Meier has publicly stated the 2007 La Scala production to be the most revelatory Isolde production she has participated in, "completely overwhelmed" by Chéreau´s capabilities as a stage director.

Carmen - Waltraud Meier´s Carmen in the 1997 Zeffirelli-directed new production at the Met was probably the low-point of her career, and the only time she received over-all negative reviews. Waltraud Meier says:
"I have enormous respect for Zeffirelli, but our two styles just didn't match. The staging was folkloristic, with horses on stage and that sort of thing. It was the most horrible time, but I don't think about it any more. A mistake? Well, my philosophy is that there are no faults, only errors. You learn from your mistakes and come through knowing more."

Subsequently she sang the part in Dresden 2005, but now seems to have retired it.

Waltraud Meier swill sing Klytemnestra in the new Patrice Chéreau Elektra production at the Met around 2013.

As I understand it, Nina Stemme was priginally supposed to sing Sieglinde in that Walküre. However, these things change, however..

The thing I love the most about WM is her skills as an actress. If you look close into Tannhäuser (Mehta & Kollo) or Tristan (J-F West)she follows and show her feelings i a very good way. She reaches the same levels as any "ordinary" movie/theatre actress, but then again she has to sing at the same time.

An interesting article in the Times about Waltraud and her upcoming appearance at the 2009 Proms.
http://entertainment.timesonline.co.uk/tol/arts_and_entertainment/music/proms/article6795046.ece