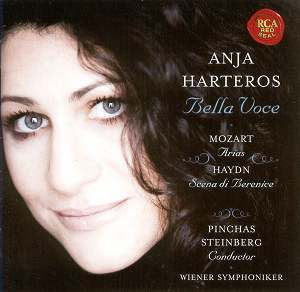 For German soprano Anja Harteros (born 1972), winning the 1999 Cardiff Singer of the World competition was the major breakthrough. However, she has carefully build her career from there and has now emerged as the perhaps most promising lirico spinto soprano of her generation.

Considering Anja Harteros´ potential in the lirico spinto repertoire (Don Carlo, Simone Boccanegra, La Traviata etc.) where few others excel, and those who do are basically long gone, the choice of arias (Mozart and Haydn) for her debut disc seems rather strange. As does the title of the disc- bella voce - considering the repertoire.

That said, Mozart has played a major role in Anja Harteros´ career, especially Donna Anna, Figaro-Countess and Elektra (Idomeneo), the latter two included on this disc together with Fiordiligi´s two arias (Cosí fan tutte) and three concert arias. Accompanied by Haydn´s Berenice, which concludes the disc.

Anja Harteros sings Mozart with the same punch and floating expressions she brings to Verdi. It is great Mozart-singing, but it would be even greater lirico spinto repertoire singing. Anja Harteros´ expressive range is impressive: She brings the needed dramatic punch to Mozart´s answer to Lucia de Lammermoors Mad Scene, Elettra´s D´Oreste e d´Ajace as well as the quiet dignity to the Figaro-Countess in Porgi, amor. And she manages both the coloratura and trills of Fiordiligi. As well as placing an individual stamp on it all.

My mezzo fiance RAVED about her in Traviata at the Met. A total surprise to her.