Hamburg: Revival of the infamous Konwitschny Meistersinger in which the music suddenly stops in the middle of Hans Sachs monologue 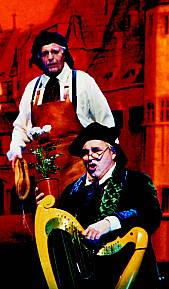 With this 2002 production of Meistersinger, Peter Konwitschny has in fact succeeded in creating a maximum of controversy with a minimum of means. As it is during the first 255 minutes of this 260 minutes opera, nothing really happens: A wooden platform is placed center-stage. The characters wear period costume. A screen projects various images of Nürnberg behind the platform. None of the characters are particularly characterized, perhaps attributable to the revival status of the production. The various interactions seemed rather uninspired.

Then, with 5 minutes to go comes Konwitschny´s coup-de theatre: In the middle of Hans Sachs´ infamous "deutsches volk" monologue, the Meistersinger suddenly start to interrupt, talking loudly between themselves. The music stops. One of the masters asks Hans Sachs if "he really knows what he is singing" and then a discussion between the various characters on the essence of being German begin. Asked whether he just couldn´t remove the phrase, Danish conductor Michael Schønwandt finally answered "in Denmark we also removed the phrase immediately after the second world war". After about 5 minutes of discussion, the music started again.

Are you really allowed to do that? Stop a performance of Meistersinger to discuss the text in front of the audience? Why not, I suppose. However, only non-Germans may wonder, whether the topic of discussion is even relevant, more than 50 years after the conclusion of the Second World War. It is highly relevant and highly controversial, even today. Now, whether there is anything inherently nationalistic in Hans Sachs monologue from the hand of Richard Wagner, I sincerely doubt. But that seems to be besides the point.

Of the singers, Edith Haller, whose Gutrune was one of the few highlights of last years Bayreuth Ring, looks like a jugendlich-dramatisch soprano star of the future. Her Eva was simply superb, especially her upper register truly shines. The other highlight was Jochen Schmeckenbrecher, for once a Beckmesser singing all the notes: No yelling or sprechgesang. Furthermore he was rather funny. Not to forget the fine Pogner from Georg Zeppenfeld.

As I am extensively familiar with usual-suspects-Wagnerians John Treleaven and Alan Titus, I can´t say they disappointed as Walther and Sachs, respectively. Which I probably would have said did I not know them. Furthermore the coordination between Michael Schønwandt and Alan Titus was appallingly poor, something I am inclined to blame Alan Titus as he repeatedly set his own tempi, which were markedly different from everyone elses.

Major applause to Michael Schønwandt, well-deserved as he is a fine conductor, with whom I am extensively familiar with as he is Chief Conductor at the Royal Danish Opera. However, I suspect the performance to have been underrehearsed as the essential flow somehow was lacking.

One of the most talked-about Wagnerian productions of the past decade. Based on a 5-minutes discussion inserted in the middle of a monologue. Rather well-done of Konwitschny. Not to forget, the topic of discussion is highly relevant.

Photo from the website of the Hamburg State Opera
Posted by mostly opera... at 16:00