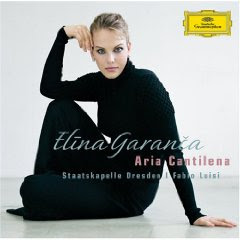 It seems a safe bet that 1976-born Lativan mezoo-soprano Elina Garanca will become one of the major opera singers of the future: She has signed a solo contract with Deutsche Grammophon. Her manager is Jeffrey Vanderveen (who also happens to be the manager of Anna Netrebko). She looks great, she acts great, she sings great. What more can you ask for? Not much as I am concerned.

For this her debut disc for DG, "Aria Cantilena" she sings a varied repertoire, from zarzuela arias to excerpts from Rosenkavalier.

First of all, Elina Garanca has one of the finest mezzo-soprano voices of today with an astonishing solid middle register, excellent technical control and dashing coloratura as well as a beautiful timbre. For the pedantic, she may occasionally strain and be slightly off-pitch on the highest notes, however it seems more a result of her dramatic expression running away with her than of a genuine vocal problem.

Secondly, Elina Garanca is wonderfully dramatic and forceful as an interpreter. I wouldn´t necessarily disagree wildly if some listeners find her interpretatively unvaried, however I personally found her to be completely refreshing.

Even Werther´s Charlotte benefits from this straight-forward interpretation, which, agreed is not very French at all. Admittedly I have never been on to care much for diction (except in Wagner, which is not relevant here), but objectively her French diction is somewhat less than perfect, which also applied to the superbly sung Vois sous l'archet fremmisant from Hoffmann´s Tales.

For the two Rosenkavalier-excerpts Elina Garanca has been given superb colleagues in Diana Damrau and Adrianne Pieczonka. Furthermore, Octavian is a role which superbly suits Elina Garanca´s straightforwardness, dramatically as well as vocally.

Perhaps, the best track on the disc is a superb no-nonsense rendition of Las Carceleras from the zarzuela "Las hijas del Zebedeo".

Thanks for the great reviewing: Your blog is helping me learn about opera. Could you please explain briefly why you make a discrimination between Wagner and other composers over the clarity of words.For my part, I wish that all singers had the directness of intelligibility of those in popland. Good luck!

Thanks for commenting. Regarding the diction: It really only is a personal opinion, that I consider the text in Wagner so intrinsic to the drama, that it irritates me when I don´t understand what the singers are singing.
Plenty of other readers may tell you how diction is equally important in Italian and French opera, which of course is completely true.

I haven't listened to the CD yet but based on what I've heard of her you are absolutely right in your description of her voice. Further, while I'm not sure whether her vocal acting is particularly notable on the CD but in the the theater she is absolutely superb and gives very specific characterizations Octavian, Cherubino, Sesto (admittedly somewhat similar roles), and Rosina (though somewhat less so in concert as Romeo).

It'd be very interesting to hear her as Dorabella (perhaps with Dasch).

She was a superb Dorabella in the Aix-en-Provence production by Patrice Chéreau (on DVD as well).

Garanca will play Cinderella in La Cenerentola which will be broadcast live from the Met on May 9th, 2009.