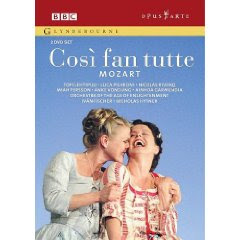 Nicolas Hytner´s 2006 Glyndebourne production of Cosí fan Tutte is astonishingly traditional. Period costumes and period sets. Does he have any take on the work at all? It doesn´t seem so. Which according to preferences may be a liability as well as an asset.

Nevertheless (or because of this), the performance is highly entertaining, as the the acting from the young cast is superb over the entire line. But no one shines more than Miah Persson, whose portrait of Fiordiligi is first-rate as is her singing, navigating her two fiendishly difficult arias with seemingly ease. The rest were perhaps vocally not quite as impressive as Persson, Luca Pisaroni apart, but they made up for any lack of vocal characterization with superbly engaged acting. And they all looked great. That said, all sang well, though Toni Lehtipuu seemed rather anonymous as Ferrando. Especially the interaction between Miah Persson and Anke Vondung was superb and a core factor to the success of this production.

Engaged and bubbly performance from Ivan Fischer and the OAE, though it is no secret that I prefer the classic Mozartean style of the old Germans, such as may be seen in Barenboim´s Berlin Cosí fan tutte.

I would expect this production to appeal to a quite large number of customers: Those adverse to Regietheater will obviously like it, and those in favour of Regitheater will also find it entertaing, due to the superb acting.

Posted on YouTube by FuzzyCerts
Posted by mostly opera... at 17:30

I thought Topi Lehtipuu was superb! As he was in Les Paladins.

This DVD is fantastic, IMO. I just bought the Bluray to replace it and was actually supposed to have gone to Glyndebourne in May (2010) for the repremiere, with Tuva Semmingsen (of the Royal Danish Opera) singing Dorabella. But she'll be on maternity leave by then, so I'm not bothering. I don't think this cast can be outdone, so I'll stick with the Bluray.

Big fan of your blog!

Is there any way to watch full così fan tutte online performed by miah persson?

don't know how to get this dvd... so sad

yes, Dailhar, the DVD is available online as a torrent file (if you know how to search for and download torrents).