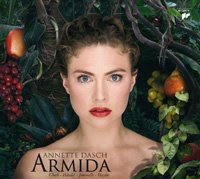 This disc of various representations of the sorceress Armida, is Annette Dasch´s first solo disc under her exclusive Sony contract. It dates from 2007 and won her an Echo klassik award (major German award) as best opera album 2008.

Coincidentally (or perhaps not?), Annette Dasch´s major breakthrough came in Salzburg in 2007 with Armida in Christof Loy´s staging, a portrait she will repeat in Salzburg 2009. Hereafter she has by many been considered one of the most promising lyrisch/jugendlich-dramatische sopranos around, an assessment with which I agree.

First of all, contrary to most other sopranos her age, Annette Dasch (born 1976) has personality. She infuses these baroque arias - from Gluck to Haydn, with individuality and drama. Her strongest assets are her dramatic expression and her solid middle voice. Her weakest points are her top-notes, which sound metallic and strained. Futhermore she doesn´t seem completely at ease with the coloratura. But she should be able to choose her future repertoire as to suit her considerable strenghts. Perhaps most impressively, she manages to avoid the sameness, that more than occasionally makes such recital discs rather tedious affairs.

She was a rather superb Donna Elvira last season at the Berlin State opera while she got mixed reviews for her Salzburg Donna Anna earlier this season, a part I would intuitively think too high for her (she was sick for a large part of the run, including the evening I was there). Next season will see her debut at the Metropolitan Opera as the Figaro-Countess and in 2010 she will be Elsa in the new Lohengrin in Bayreuth.

In October 2008, her second disc (Mozart arias) was released by Sony.