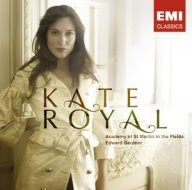 A lyric soprano, 1979 Essex born Kate Royal is probably the most prominent among the younger British singers. Her breakthrough came as Pamina in Glyndebourne 2004, a role she has also repeated with the Royal Opera, Covent Garden. Kate Royal´s current opera repertoire includes the Figaro-Countess, Poppea, Ilia and Micaëla (Carmen) and she has until now mainly performed in England (Glyndebourne, Royal Opera, English National Opera). Kate Royal seemingly gives equal attention to her concert career, with plenty of lied and concert performances.

For her first solo disc for EMI simply entitled "Kate Royal", she has been given both distinguished wrapping and stylish repertoire. No Puccini and Mozart hits here. Instead Debussy (L´enfant prodigue), Canteloube (Chants d´Auvergne), Stravinsky (Rake´s Progress) and some Richard Strauss songs are programmed. All very downplayed, stylish and elegant. Album tracklist and further information here.

Kate Royal´s voice is simply very pleasant to listen to. Her delivery is elegang and stylish, though still natural throughout. Many will undoubtedly find nothing to complain about here. Though, ideally I would wish for more expression and individuality as it all tends to blend together and be simply too nice. Though, there can be no doubt, that Kate Royal is immensely promising and at only 29, she has plenty of time to develop her own voice.

And her French sounds perfect, too...