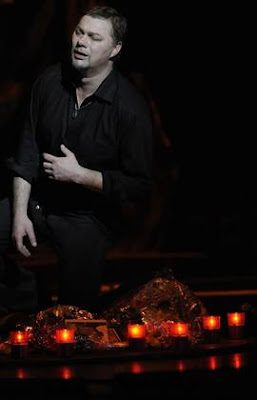 Photo gallery from the production may be found here.

Christian Pade has created a both highly intelligent and intriguing staging of Boris Godunov for the Dresden Semperoper, though, despite having read extensive interviews with both Pade and René Pape describing the concept prior to the performance, I must admit to not understanding everything, which is both fascinating and irritating.

Christian Pade quite clearly relies on the recently achieved consensus by historians, clearing the historical Boris Godunov the murder of the real Dmitri.
As the curtain goes up, we see a group of contemporary dressed ordinary people inhabiting an abstract landshape. A 20ish-something Boris in jogging outfit is one of them. Shuisky enters, pushing a pale boy with a glittering Czar crown into the crowd. The boy is killed by the mob, clearly not by Boris, who just happen to pick him up, and subsequently is believed to be the killer by everyone else, including the recently arrived Pimen, though I am less certain regarding Shuisky. Nevertheless, this young man is subsequently crowned by the contemporary Russian mobster look-a-like boyars, assuming a role he is obviously very uncomfortable with and has no idea of how to handle. All very clearly projected by René Pape and thus no need to rely on the programme notes this far.

In fact, this is the essence of Pade´s Boris Godunov: The psychological pressure on Boris, as the surroundings believe him guilty of a deed he didn´t do, and how he ultimately comes to doubt his own guilt as well, leading to his destruction. This is as fine and sufficient a concept to fill out the drama of Boris Godunov as ever, especially when you have a protagonist able to act it out.
However, at this point Christian Pade introduces another main theme, placing Pimen in front of a tapestry on which a continually changing succession line of historic Russians is projected.
The point is clearly made: History may change according to the viewer and be wrongly transmitted to future generations, a concept resonating well with the recent absolving of Boris´ guilt in the murder of the real Dmitri as well as with the history of modern Russia, not to speak of Dresden, as part of the former East Germany. What Pade, unfortunately fails to deliver, is a characterization of the protagonists, Boris apart. Thus at no point do the motivations of such central characters as Pimen, but particularly Shuisky become clear, which significantly limits the impact of the staging.

From then on, I am a bit unsure of what exactly takes place on stage, which may well be Christian Pade´s intention, as reality and dream melt indistinguishably together. The “Inn” is a wall where relatives (repeatedly dismissed by the police) have posted photographs of missing relatives (abducted by the System?). And, not unimportantly: Though the original seven-scene 1869 version is on the table, we are not cheated of an intermission, which is placed here.

After the intermission, the psychological break-down of Boris takes center-stage, surrounded by myriads of stage action probably related to the history-deceptive part of Pade´s concept. Ultimately unnecessary, as none of a random sample of audience around us really noticed the many symbols anyway, as it is impossible not to be captured by René Pape´s Boris Godunov, which by all standards is simply shattering.

Boris Godunov is, by a large margin (even to Filippo and King Marke), René Pape´s best role on stage to date, and the only one where he really takes those interpretatory risks, even I find that he often fails to take. Being René Pape´s second attempt at the role, following Tcherniakov´s controversial (in my opinion: Superb) production in Berlin, he is arguably even better here in Dresden, displaying simply stunning acting skills and hitherto unseen interpretatory vulnerability and depth, leaving all his usual lofty manners way behind.
Great Boris interpreters of the last decade such as Samuel Ramey, Matti Salminen, Sir John Tomlinson and (to a certain degree) Ferruccio Furlanetto, all create dramatically convincing portraits of Boris, while singing a varying portion of the notes. What René Pape does in addition to dramatic impact, is to sing all the notes as well as create smooth legatolines etc., which in short adds up to: No sprech-gesang or yelling. Which is probably René Pape´s biggest asset: That he can express everything with his voice when he wants to. Including a death-scene to, well…die for, in what was probably the best performance of his entire career.

And an important one as well, returning as a star to his own city, for the first time in a premiere at the Dresden Semperoper. If there is a single newsmedium around here, which has not run a major feature along the lines of Dresden´s famous son returns to be crowned by his native city, I have failed to see it. Though I would be surprised if not at least a couple of the German music critics end up criticizing him for not being the profundo-almost retired-Martti Talvela type usually seen in this role, regardless this is a staging I cannot really imagine an elderly-statesman type Boris perform in.

The contribution of the others should in no way be neglected as this was genuinely a team effort: Particularly Sir John Tomlinson makes as commanding a Pimen as anyone could wish for, rock-solid in his middle and lower register. Only in the high register you´d need to cut him some slack, which everyone in the audience gladly did, considering his overall dramatic impact. Equal impact was made by Hanna Schwarz in the small role of the Nurse. Quite unusual (and slightly odd), though by no means new, to hear a counter-tenor (Martin Wölfel) as Fyodor.

Furthermore, there was not a single weak link in this cast, which is almost even more unusual since normally at least two of the three basses fail to deliver. Apart from two superb lead basses, both Markus Marquard (Varlaam) as well as Wolfgang Schmidt (Shuisky) and especially Stefan Margita as the False Dmitri delivered top performances. Not to forget the ~8 year old boy from the Dresden Kreuzchor playing a rather large role as a continuously appearing real Dmitri.

Even Sebastian Weigle, whom I have repeatedly criticized of passivity (though mostly in Wagner), deservedly received major applause. A rather lyrical reading, though not without punch and quite obviously Weigle knows the work well (he also conducts the Matti Salminen DVD from Barcelona), and is in control of happenings, particularly evident in the impeccably precise choral scenes.
The boos and bravos for the directorial team probably equalled each other out – after all it is Regietheater and a premiere in Dresden without any booing is not a real premiere..

Truly a Boris Godunov suited to the 1869 seven-scene staging, as the Polish scenes, though beautiful, would have been completely out of place as well as irrelevant to the psychological drama of Christian Pade´s staging. As would the Rimsky-Korsakoff orchestration, though the Shostakovich orchestration would have worked fine.

Considering that all of the previously mentioned random audience sample vehemently denied any knowledge of Russian, they were surprisingly proficient at translating the Russian writing, which appeared frequently throughout the piece. After all, similar random samples of the Danish population have been known to deny any knowledge of German as well, though most at least understand some of it. Probably for similar reasons.. 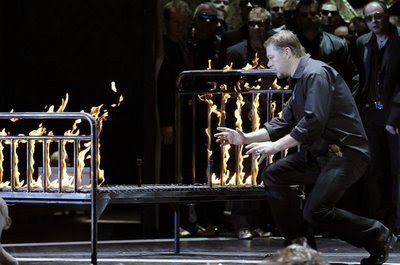 mostly opera - did you see German press agrees with you? I read 4 reviews, all say René Pape was completely fantastic, and also mention his acting as you do and say he is best in the world as Boris?

Mostly - I have to say, that I haver never really been ad admirer of René Pape, but based on what you keep writing about him, we decided to attend this Boris premiere in Dresden.
And much as I hate to admit it, I must say I completely agree with your review.

I have seen all the greats (Salminen, Furlanetto, Ramey) as Boris, but none of these made the devastating impact René Pape did last Wednesday. He simply delivered one of the singularly most impressive performances I have seen in more than 40 years of operagoing. Simply amazing.

One of the newspapers wrote " Rene Pape acted like he was a major Hollywood filmstar".

I did not go, but several friends went: They also agree with what is posted above and say he was mesmerizing. I hope to go next week.

Apology for my bad English, just want to write short comment to say I was also at premiere and agree that René Pape was wonderful, but also heartbreaking.

Also agree with mostly opera it is best performance I have seen him do - have seen him more than 50 times in all his roles in Berlin.

Rene pape IS the best Boris in this world!